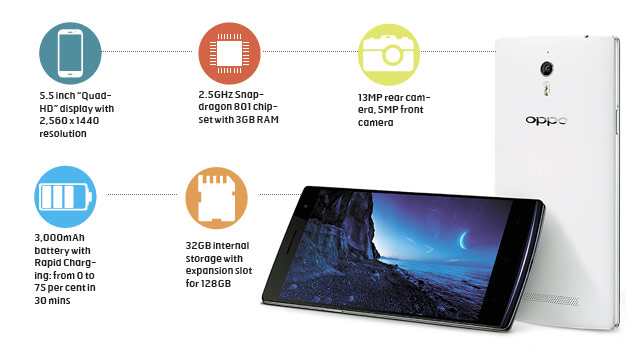 08 November, 2014
Print this article Font size -16+
There are so many  unusual things about Chinese company Oppo’s Find 7 smartphone that we should dive right in. First, Oppo has upped the screen resolution so high it’s gone well beyond the point where the human eye sees individual pixels. There’s much debate on whether there’s any point in it and whether it’ll just be a battery guzzler, but others say well, it still looks beautiful. It’s a big display, so it’s quite a treat to look at. The Find 7 has only one speaker, else it would have competed with HTC’s signature Boom Sound speakers, but even this one is loud and deep. Its placement on the back, however, muffles it up when you put it down on a surface such as a bed.

Then, the Find 7, like other Oppo phones, comes with the company’s own take on Android — Color OS. This is what brings in all sorts of different features, especially gesture-based ones. For instance, there are several ways to wake up the device. One of them, like the Moto X, is by saying, not OK Google, but Hey Snapdragon. That will undoubtedly look a bit silly, but it promptly wakes the phone up to go straight to Google Now, ready for a search command. Another way is to knock on the screen, LG style. Another is by drawing a shape on the black screen as it sleeps, such as a line to the left to wake up and go to the camera. You can also just swipe down with two fingers to unlock. There are a number of gestures you can set and modify this way such as a V to open up the flashlight or circle to call someone specific. You also have gestures from an awake screen when you pull down from the top left and draw a shape to lead to some action. I really like these and though they seem like gimmicks I think they could be pretty useful. I’d rather like to just swipe a locked screen to call my car in the sunlight, for example. Quick, and I don’ t have to even look at the phone.
The rest of Color OS has to do with its home screen arrangement, widgets, animations, effects and themes, and a nice pull-from-down drawer to house all these. The device has a huge amount of RAM to keep all this going smoothly with no hint of slowness or lag except for stutter when browsing.

The problem with being too individual and different with a layering on Android is that one can’t update as readily to the newest version.

You would think all the gimmicks would drain the battery, but I played with it through the day constantly and it lasted a good 10 hours. But here’s the thing: Oppo has included a special charger that will take the battery from 0 to 75 per cent in half an hour.

The camera also has some tricks up its sleeve, the biggest being that it can take 50 megapixel photographs when it’s a 13 megapixel camera. This is done by taking 10 super quick shots and creating the image from four of them, which can be close to 10MB in size. I found it depended a lot on being really still in which case you got surprising detail. But equally often I got softness in photos. Indoors, I found the colours less than accurate. Still, the camera is full of effects and scenes to play with. The 5MP front camera obviously keeps selfies in mind. The camera also does 4k video recording.

It’s a beautifully designed phone. Rounded in places, fitted with a classy looking removable panel, and set off with a special pulsating strip of light.

The price of the Find 7 (which also has a scaled down version called the Find 7a) is a reasonable Rs 37,990, but I’m not sure what Oppo is doing to really make itself known in the Indian market.
(This story was published in BW | Businessworld Issue Dated 25-08-2014)
Tags assigned to this article:
mala bhargava magazine google htc blackberry z3 magazine 25 august 2014 oppo find 7 lg l90