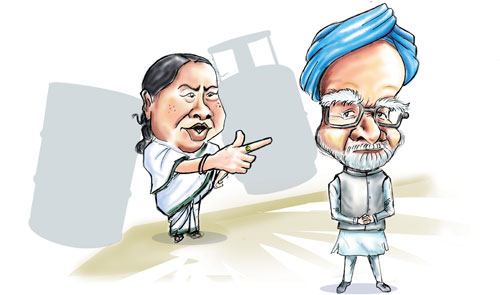 08 November, 2014
Print this article Font size -16+
The government has suddenly found the resolve to announce a host of measures that it had been sitting on for some time now. It has raised the price of diesel, put a cap on the number of cylinders of subsidised LPG that a household can get in a year, and also announced measures for foreign direct investment in aviation and retail.

Predictably, its announcements attracted howls of protest from allies and the opposition parties alike. At the time of writing, one ally — the Trinamool Congress — has withdrawn support, and it is unclear whether the UPA government can remain in power, and even if it does, for how long.

Economists and businessmen have applauded the government’s steps, and as far as this magazine is concerned, its position is that all these measures were necessary— and should have been taken months, if not years, ago. The Congress — which is the main constituent of the UPA government — is making noises about how it will go down fighting but not back down from these steps.

The Congress sentiments are laudable, but it could do with a bit of soul searching. Sure, it can blame its current predicament on recalcitrant allies, who have steadfastly opposed every policy reform it has proposed. But then, that is the cost of tying up alliances where none of the allies have anything in common when it comes to economic thought. An even bigger problem is that much of the Congress’s current woes also stem from the fact that it didn’t do anything even in the areas where it had complete control. It had a golden chance to improve infrastructure — specifically roads — an area in which it did not need any support from its allies. It messed up in telecom and aviation, because it turned a blind eye to bad decisions by its allies. It could not make much progress in food distribution. It failed to get its act right in the UIDAI project because of internal politics. It turned a blind eye to the Commonwealth games fiasco — something that was handled by one of its own luminaries. It did nothing significant in power. And finally, it gave away coal mines to dubious companies without checking their antecedents.

The Congress can act the injured party,  but its act would have been a lot more convincing if it had taken some real steps to govern the country.