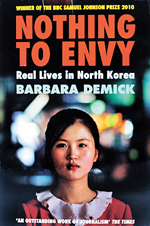 You have known it all along; North Korea is one of the most repressive and secretive regimes on earth, where citizens face the worst forms of human rights abuse and oppression. But the book lends shape to your fears. A former Soviet ally, this nation of 23 million people is "simply a blank" today, writes Barbara Demick in Nothing To Envy: Real Lives In North Korea. Demick is foreign correspondent for the Los Angeles Times and covers both the Koreas and West Asia. The book, which has won the BBC Samuel Johnson Prize 2010, tracks the lives of six people; a pair of teen lovers, a principled lady doctor, a homeless boy, a factory worker, who adores Kim Il Sung, the cult communist and the father of current supremo Kim Jong-il, and her daughter.

Each account is rich as well as disturbing. For example, Oak-hee, who hails from the industrial town of Chongjin, speaks of the gruelling ‘volunteer work'. North Korean teenagers are supposed to collect ‘night soil' from neighbouring apartments. As the country is short of fertilisers due to, among the other things, sanctions imposed on it by the West, each family has to carry a bucketful of excreta to a warehouse miles away. In return, they get a food coupon. The book has several such slices of lives. But, as one finishes reading the book, one would also condemn the sanctions as one would the despotic reign of Kim Il Sung; both kill innocent millions.