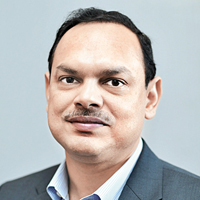 Delaware seems to be in a situation wherein Uday, who had been a star performer and effective contributor over the years, is now seen as a ‘blocker' as they had succession plans in place where there is no meaningful ‘next role' for Uday to move into. It turns out that Uday was asked to  leave or take a smaller role. In these circumstances the best option for Uday would be to agree with the company and accept a package that is fair and quickly move on.

Any delay would not be good for the organisation as it would not be able to follow its succession plan on time, or would be left with a demotivated Uday hanging on in some ‘project management' role and spreading negative energy within the organisation. If the senior leadership at Delaware, particularly Ajit Saigal, who has been working closely with Uday, is able to the see the situation this way, they would immediately realise that a win-win solution could be achieved by being flexible on Uday's package (since there seems to have been a precedent of higher packages) rather than extending the time he could be on the company's rolls. Negotiation on these lines would meet the needs of both parties better and consequently have a higher chance of success.

For Uday, it might be best to treat Delaware as a closed chapter and move ahead in his professional life at the earliest. Yes, it would be equally  important to get the best possible package and leave with his reputation intact. However, there are three possible routes available for Uday. The first one is to fight Delaware tooth and nail given the arbitrary way in which he was being terminated and the apparent unfairness of the package on offer. This could even be a public spat wherein Delaware would be embarrassed but Uday's market reputation could also get damaged in the process.

The second option is to accept Delaware's proposal and move on. The risk here is that his interests might be compromised if he did things in too much of a hurry.

And the third is to remain patient and respectful but also firm and unemotional in his discussions and negotiations with Delaware. Although it is difficult to do this as a lot is at stake for Uday, this approach would probably have the best chance of helping him achieve his twin objectives of getting a reasonable package and moving on to a new job with his reputation intact. He would also need to focus on and expedite the process of finding a new job. Uday should also continue leveraging the support of people such as Brian, Sara, Maya and Ambi as it is always a good idea to consult a few people in a situation like this. Maya and Ambi can also be leveraged to send subtle messages to the organisation and also to evaluate the preliminary response of the company to these messages.

As has been pointed out a few times in the case, the key ethical issue involved is ‘respect'. Having made the decision to part with a long serving employee, (I am not commenting here on the merits of the decision as that was covered in the first part of the case) Delaware could possibly best deal with the situation by demonstrating respect in a few  ways:

The respectful approach, if handled properly, has a greater chance of arriving at a mutually acceptable solution quickly compared to the current approach. A key point here is that had Ajit Saigal been more respectful and empathetic in his approach and communication with Uday, he may have elicited a more neutral response from Uday in the first place and the current unpleasant state of affairs could have easily been avoided.

In short — a more respectful, empathetic, open and direct approach to the situation by Delaware could still help to reach a reasonably amicable resolution of the issues at hand.

Samik Basu is the chief people officer for PepsiCo, India region. Earlier, he was senior HR director for PepsiCo South East Asia based in Bangkok.