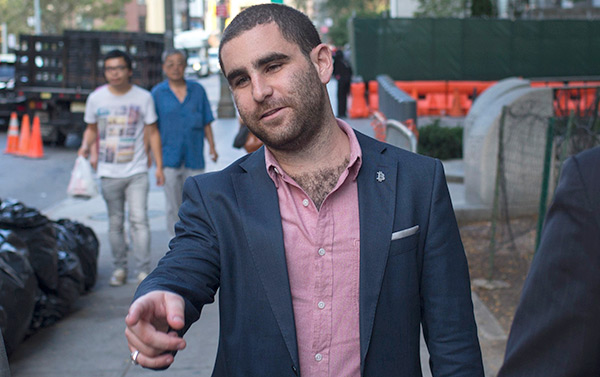 08 November, 2014
Print this article Font size -16+
A man who helped to promote bitcoin wants to remain in the business despite pleading guilty Thursday to indirectly helping send more than $1 million in the digital currency to users of the illicit online marketplace Silk Road, his lawyer said.

Charlie Shrem, 24, pleaded guilty at a hearing in New York federal court to one count of aiding and abetting an unlicensed money transmitting business.

A co-conspirator, Robert Faiella, 54, separately pleaded guilty to operating such a business. Both men face up to five years in prison when they appear again in court in January.

"I knew that much of the business on Silk Road involved the buying and selling of narcotics," Shrem said in court. "I knew that what I was doing was wrong."

His lawyer, Marc Agnifilo, said that what Shrem did was an aberration and that Shrem plans to continue working in the bitcoin world if possible. Agnifilo emphasized that his client was not involved in directly supplying bitcoin to Silk Road users.

"We believe he is at least one step more removed from the heartland of illegal conduct, which is really Silk Road," the lawyer said.

The two pleaded guilty as part of a deal struck with prosecutors from the office of Manhattan US  Attorney Preet Bharara. They had been scheduled to go on trial Sept. 22.

US authorities shut down Silk Road last year, though a new version bearing the same name was launched soon thereafter. The man accused of creating and operating Silk Road using the alias "Dread Pirate Roberts," Ross William Ulbricht, is facing separate charges and is scheduled for trial in November.

Shrem stepped down from his post as vice chairman of the Bitcoin Foundation, a trade group, soon after his arrest in January. He was previously the chief executive of BitInstant, a bitcoin exchange company.

Shrem processed transactions for Faiella through BitInstant despite knowing the bitcoin would eventually find their way to Silk Road, where the funds would be used for drugs, he said in court.

Both men agreed to forfeit $950,000 to the government as part of their plea deals.

"Robert Faiella and Charlie Shrem opted to travel down a crooked path - running an illegal money transmitting business that catered to criminals bent on trafficking narcotics on the dark web drug site, Silk Road," Bharara said in a statement.