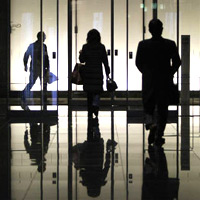 08 November, 2014
Print this article Font size -16+
Many millionaires got poorer in the last year, but billionaires did just fine, using their heavyweight money management teams to ride out market and economic turmoil that hit the lesser rich, research company Wealth-X said on 17 September' 2012.

The ranks of people with at least $30 million edged up to 187,380 but their total wealth fell 1.8 per cent to $25.8 trillion -- still a sum bigger than the combined size of the US and Chinese economies, Wealth-X said in a report.
Hardest hit globally were those in the $200 million to $499 million range, whose numbers dropped 9.9 per cent and whose fortunes shrank 11.4 per cent, the World Ultra Wealth Report said, using data for the year through July 31.
But the really, really rich got even richer as the number of billionaires rose 9.4 per cent to 2,160 people and their wealth grew 14 per cent to $6.2 trillion.
"Even at a billion or two billion, they have a much larger entourage, they have much more in the way of investment advice. They certainly get the attention of every major bank," Mykolas Rambus, Wealth-X's chief executive officer, told Reuters.
"This was the issue about that mid tier, the $100- to $500-million risk land. I don't think it appears these guys employ enough talent to help their own portfolios plus their holding companies to be successful."
As Europe struggles and the US economy recovers fitfully, the affluent are shifting away from speculative investments into private companies, commodities and property, said Wealth-X, a Singapore-based firm that provides intelligence on the ultra-rich to banks, fundraisers and luxury retailers.
Asia suffered the worst regional loss of wealth, with a fall of 6.8 per cent to $6.25 trillion due to weaker equity markets and lower export demand from the West, it said.
While wealth also shrank in Europe, Latin America and the Middle East, the rich saw their fortunes grow in North America (up 2.8 per cent to $8.88 trillion) and Oceania (up 4.4 per cent to $475 billion) -- much of that in Australia.
But Asia's rich cannot be discounted, Wealth-X said, as the fall in wealth in Japan, China and India -- home to 75 per cent of ultra high net worth (UHNW) Asians -- will reverse, based on the strength of the region's financial systems and economies.
"Total Asian UHNW wealth is forecast to surpass the US combined wealth by 2020," it said.
(Reuters)
Tags assigned to this article:
economy europe news 7 world us economy uhnw billionaires chinese economy wealth-x economic turmoil money management