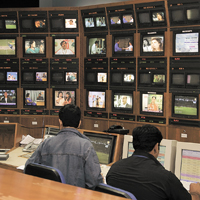 08 November, 2014
Print this article Font size -16+
Beginning 1 May, 2013, leading television broadcasters across the country have pulled out ads from their networks owing to a billing dispute with ad agencies. According to the broadcasters, ad agencies that did not give them a release order reflecting the net amount of the value of the ads would find their advertisements pulled out of air. As of now, most agencies give broadcasters a release order that has the gross amount of the value of the ad that includes the agency commission. When they pay the broadcasters for the telecast of the ad, then the payment is made after deducting the agency commission.

The billing issue apparently was triggered when a leading broadcaster received a notice from tax authorities asking them to deduct tax at source for the commission to ad agencies. Both ad industry body, Advertising Agencies Association of India and the broadcasters federation have been talking over a month to resolve the issue.

Ad men were hesitant to go on record. “We don't know why there is so much rush and push on this one. This case from tax authorities is bad in law, because on two previous cases in 1995 and 2012, the demand of the tax authorities have been rejected. There is no need to do a TDS on commissions,” said the chief executive of a large media buying house.

Agencies having public sector undertakings as their clients are also going to be among the severely affected, as many PSU clients still continue to stick to the 15 per cent commission structure. The potential loss on revenues to ad agencies could be as much as 17.65 per cent.

The problem could get worse if print media companies insist on net billings too. A host of small agencies could bear the brunt of the moving from gross to net billings, says one media expert. “What bothers us is the force and speed of implementation by the broadcasters who seem to have gone unilaterally with this demand,” said another senior ad executive.

Industry body Advertising Agencies Association of India is meeting broadcasters later on 2 May evening to break the impasse.  Even if ad agencies eventually agree to shift towards a net billing, the implementation is likely to take time as agencies will have to renegotiate the terms of compensation with clients and rework contracts.
Tags assigned to this article:
exclusive to web prasad sangameshwaran tds public sector undertakings othertop1 broadcaster remuneration structure agency commissions television broadcasters billing issue commission percentage billing dispute advertising agencies