Bill Gates Has His Way 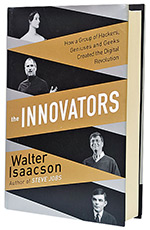 02 December, 2014
Print this article Font size -16+
In the fall of 1968, when (bill) Gates was entering eighth grade, he and Allen formed the Lakeside Programming Group. Partly it was a geek’s version of a gang. “At bottom, the Lakeside Programming Group was a boys’ club, with lots of one-upmanship and testosterone in the air,” said Allen. But it quickly morphed into a moneymaking business, and a competitive one at that. “I was the mover,” declared Gates. “I was the guy who said, ‘Let’s call the real world and try to sell something to it.’” As Allen later noted with a bit of an edge, “While we were all bent on showing our stuff, Bill was the most driven and competitive, hands down.” The Lakeside Programming Group included two other denizens of the school’s computer room. Ric Weiland, who was in Allen’s tenth-grade class, was an altar boy at the local Lutheran church whose father was a Boeing engineer. …The other partner was Kent Evans, who was in Gates’s eighth grade class. …The Lakeside Programming Group’s first job came that fall of 1968. Some engineers from the University of Washington had formed a little time-sharing company, housed in an abandoned Buick dealership, called the Computer Center Corporation and nicknamed C-Cubed. They bought a DEC PDP-10—a versatile mainframe that was destined to become a workhorse of the burgeoning time-sharing industry and Gates’s favorite machine — with the plan of selling time on it to customers, such as Boeing, who would hook in via Teletype and phone lines. One of the partners at C-Cubed was a Lakeside mother who came up with an offer for Gates’s gang that was like asking a posse of third-graders to be tasters in a chocolate factory. The mission: to drive the new PDP-10 as hard as they could and as long as they wanted, programming and playing on it nights and weekends, to see what things they could do to make it crash. C-Cubed’s deal with DEC was that it would not have to make lease payments for the machine until it was debugged and stable. DEC had not counted on its being tested by the pubescent hot-rodders of the Lakeside Programming Group.

There were two rules: whenever they crashed the machine, they had to describe what they had done, and they couldn’t do the same trick again until they were told to. “They brought us in like we were monkeys to find bugs,” Gates recalled. “So we would push the machine to the max in these totally brute-force ways.” The PDP-10 had three magnetic tapes, and the Lakeside boys would get all of them spinning at once and then try to crash the system by launching a dozen or so programs to grab as much memory as they could.

“It was goofy stuff,” Gates said. In return for performing their shakedown cruise, they got to use all the time they wanted to write programs of their own. They created a Monopoly game with random-number generators to roll the dice, and Gates indulged his fascination with Napoleon (also a math wizard) by concocting a complex war game. “You’d have these armies and you’d fight battles,” Allen explained.
“The program kept getting bigger and bigger, and finally when you stretched it all out, it was like fifty feet of Teletype paper.” The boys would take the bus to C-Cubed and spend evenings and weekends hunkered down in the terminal room. “I became hardcore,” Gates boasted. “It was day and night.” They would program until they were starving, then walk across the street to a hippie hangout called Morningtown Pizza. Gates became obsessed. His room at home was strewn with clothes and Teletype printouts. His parents tried to impose a curfew, but it didn’t work. “Trey got so into it,” his father recalled, “that he would sneak out the basement door after we went to bed and spend most of the night there.”

The C-Cubed executive who became their mentor was none other than Steve “Slug” Russell, the creative and wry programmer who as a student at MIT had created Spacewar. The torch was being passed to a new generation of hackers.

…For almost a year the Lakeside Programming Group was on hiatus. Then, in the fall of 1970, the school started buying time on a PDP-10 from a company in Portland, Oregon, called Information Sciences, Inc. (ISI). It was expensive, $15 an hour. Gates and his friends quickly learned to hack in for free, but once again they got caught. So they took another approach: they sent ISI a letter offering their services in return for free time.

The executives at ISI were dubious, so the four boys went down to Portland carrying printouts and program codes to show how good they were. “We outlined our experience and submitted our résumés,” Allen recalled. Gates, who had just turned sixteen, wrote his in pencil on lined notebook paper. They got an assignment to write a payroll program that would produce paychecks with correct deductions and taxes.

That’s when the first cracks appeared in the Gates-Allen relationship. The program had to be written not in BASIC (Gates’s favorite language) but in COBOL, the more complex language that had been developed by Grace Hopper and others as a standard for businesses.

Ric Weiland knew COBOL and wrote a program editor for the ISI system, which Allen quickly mastered. At that point the two older boys decided that they didn’t need Gates or Kent Evans. “Paul and Rick decided there wasn’t enough work to go around and said, we don’t need you guys,” Gates recalled. “They thought that they would do the work and get the computer time.”

Gates was frozen out for six weeks, during which time he read algebra books and avoided Allen and Weiland. “And then Paul and Rick realized, oh shit, this is a pain,” said Gates. The program required not only coding skills but someone who could figure out social security deductions, federal taxes, and state unemployment insurance. “So then they say, ‘hey, we’re in trouble on this thing, can you come back and help?’ ” That’s when Gates pulled a power play that would define his future relationship with Allen. As Gates described it, “That’s when I say, ‘Okay. But I’m going to be in charge. And I’ll get used to being in charge, and it’ll be hard to deal with me from now on unless I’m in charge. If you put me in charge, I’m in charge of this and anything else we do."