By Pragya Kaushika
New Delhi [India], July 1 (ANI): With Bihar Assembly polls just months away, Prime Minister Narendra Modi has tweeted in Bhojpuri and Maithali languages, both prominent languages of Bihar.
In his tweets, he listed the achievements of his government and welfare plans for the poor for the forthcoming months.
The NDA will be fighting the polls under the leadership of Bihar Chief Minister Nitish Kumar. In a calibrated move, the Prime Minister listed out points of his announcement aimed at benefitting poor in the Bhojpuri language.
Taking to Twitter, the PM in Bhojpuri explained how the extension of free ration scheme until November will benefit the poor across the country. Lakhs of migrant workers returned to the state in the aftermath of COVID-19 pandemic and lockdown and the welfare measures are expected to help them during the ongoing crisis period.
In the tweet, he said that this decision will help ensure dignity to poor and extension of PM Garib Kalyan Anna Yojana will benefit crore of people in the country.

In another tweet, he tweeted the same information in Maithali language. 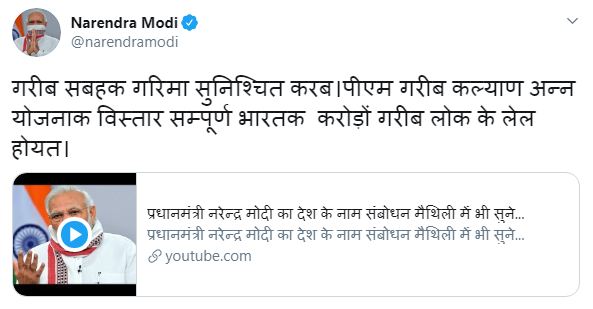 In his address to the nation, the Prime Minister had mentioned Chhath festival which is celebrated with much fanfare by people of Bihar and that taking upcoming festivals into consideration he is allowing extension of free ration scheme till festival season and that the extension of PM Garib Kalyan Anna Yojana would cost the government Rs 90,000 crore.
While speaking to ANI, Sanjay Jaiswal, Bihar BJP President said that because the festival season ends with Chhath could be a reason why Prime Minister Modi tweeted in Bhojpuri.
"This extension of ration along with MNREGA would prove to be extremely helpful for those migrated back to the state during the coronavirus-induced lockdown. As far as tweets in Bhojpuri is concerned, it is a language accepted worldwide and the scheme of the free ration is for the whole country and is a very big, bold and praiseworthy decision by the PM," said Bihar BJP chief.
Former BJP Delhi President Manoj Tiwari too thanked the Prime Minister for tweeting in Bhojpuri. 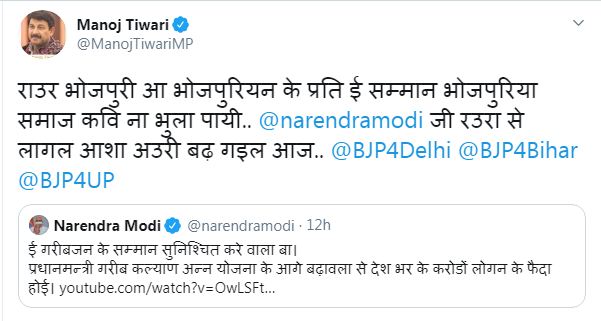 Bihar Assembly polls are likely to be held in November. The state Legislative Assembly has 243 seats where the BJP is in power along with its NDA ally Janata Dal (United) and Lok Janshakti Party. (ANI)