Big Pharma Gets A Shot In The Arm 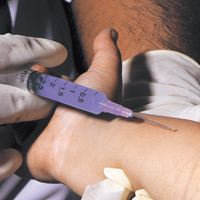 GlaxoSmithKline Pharmaceuticals (GSK) recently cut a deal with the Brazilian government, which allows it to supply a 10-valent vaccine against childhood pneumonia and other life-threatening infections for a decade at a fixed price in a reflection of the growing importance of vaccines and emerging markets to Big Pharma. The contract, valued at roughly $2 billion, envisages supplies at E11 a dose — one-third of the price in Europe — and falling to E5 as the company transfers technology to the Brazilian government to manufacture it. Brazil will include the vaccine in its national immunisation programme.

While vaccine makers have supplied to aid organisations such as GAVI at a preferential price, this is the first significant vaccines deal that has been struck directly with a developing nation where a price has been guaranteed against assured volumes. "This signals the high potential of the emerging markets," says Krishna Ella, chairman of Hyderabad-based vaccines maker Bharat Biotech.

However, Ella points out it is unclear why Brazil chose to go with GSK and not any other manufacturer. US drug maker Wyeth, for instance, has its own 13-valent vaccine against childhood pneumococcal disease. GSK has also guaranteed financial support to a dengue vaccine programme in Brazil as part of the deal, but it is unclear if that played a part in it securing the overall contract.

That apart, policy makers in India would do well to take note of this deal. The vaccines market is going to be dominated by large western pharma companies who are not just investing more in R&D, but also snapping up smaller manufacturers strapped for cash. And while the Indian market is currently supplied by a few local companies in addition to MNCs, the introduction of product patents since 2005 will slowly constrain their ability to supply globally under-patent vaccines cost-effectively. Their number too is shrinking with a couple of them allying with or choosing to sell out to MNCs. Government units, on the other hand, have lately had severe quality issues leading to shortfalls in supplies.

In parallel, there are a number of diseases such as HIV and malaria, where vaccines are still being developed. When these are ready the Indian government should be in a position to drive hard deals with their makers. It is in a fairly strong position. "India's immunisation programme is one of the largest in the world in terms of quantities of vaccines used, numbers of beneficiaries, and the numbers of immunisation sessions organised, the geographical spread and diversity of areas covered," says a note by the World Health Organization. But what has taken off more slowly perhaps is the expansion of the vaccines in the programme.

Even today, India's national immunisation programme is still "far away" from providing more than the basic vaccines (for DPT, BCG, polio, and measles and more recently hepatitis B) points out the managing director of a vaccines company. "All other vaccines are paid out-of-pocket by consumers," he says. For instance, the hepatitis B vaccine — launched in 1997 in the retail market — is still not available for adults countrywide through the immunisation programme. Similarly, a proposal to include a pentavalent vaccine — for DPT, hepatitis B and HIB meningitis for children — has been hanging fire. Perhaps this is a good place to start.