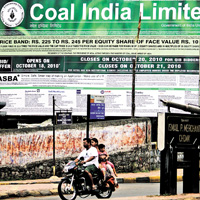 08 November, 2014
Print this article Font size -16+
In the movie Superman II, Clark Kent uses his superhuman strength to crush a lump of coal and make it a diamond for an engagement ring. Will the stockmarket's gargantuan response to Coal India's (CIL) initial public offering (IPO) — the issue was oversubscribed 15.4 times: 24 times in the qualified institutional buyer (QIB) category and two times in the retail segment — recreate that effect for investors, post-IPO and beyond?

Most experts maintain their bullish outlook for the mining giant. "We expect CIL's stock to list around Rs 20-25 above the offer price (Rs 225-245)," says Paresh Jain, metals and mining analyst at Mumbai-based Angel Broking. And what about long-term (two years and over) performance?

"We are very positive about the stock. It can cross the Rs 300 level much before that period," Jain adds. "On the P/E (price to earnings) basis, the company will trade at 13.5 times and 11.2 times its financial year 2011 and 2012 earnings, in line with its global peers," according to an Angel Broking report.

Some are even more bullish. "I expect the stock to list above Rs 300 given the kind of response it has got from investors," says Kishore P. Ostwal, managing director at CNI Research in Mumbai. "There are already buyers in the grey market who are ready to pay upwards of Rs 290. Government-owned institutions (including Life Insurance Corporation of India and State Bank of India) have put in over Rs 30,000 crore for a Rs 15,000-crore issue. And a good listing will help the government attract investors to its next disinvestments (Power Grid Corporation and Manganese Ore India)." The government is planning to sell stakes in around 60 companies over the next few years.

When CIL's stock lists on the stock exchanges on 4 November, most people will be looking for a Diwali gift (the festival of lights falls on the next day). But if recent post-issue performance of IPOs of follow-on public offers (FPOs) of public sector undertakings (PSUs) is anything to go by, lowering your expectations may be wise. Here is why.

The Rs 1,079-crore Satluj Jal Vidyut Nigam's IPO, the first this fiscal year, was oversubscribed six times, but is still trading near its offer price (Rs 23-26). NMDC has been the biggest disappointment; sold by investment bankers and advisors as a way of owning India's vast mineral wealth, the stock (offered at Rs 300-350 in March 2010) is trading near Rs 279.

But others have bucked that trend: Oil India, Rural Electrification Corporation (REC) and Engineers India (EIL) have all given investors positive returns. Oil India's Rs 4,982-crore IPO in September 2009 was oversubscribed 30.82 times. Trading around Rs 1,459 now, the stock has gained almost 40 per cent over its offer price of Rs 950-1,050. The star performer has been REC. Its stock has gained over 80 per cent to Rs 382 since the Rs 3,741-crore FPO in February. EIL has given a more modest 7 per cent — its Rs 977-crore FPO was in July.

Whether or not CIL will live up to the hype is hard to predict. As US economist Richard Thaler put it, investors must keep in mind that there is a difference between a good company and a good stock.