Mumbai (Maharashtra) [India], December 26 (ANI): Channelling her weekend mood, Bollywood star Bhumi Pednekar on Saturday treated fans to stunning pictures in red attire and revealed her current favourite song.
The 'Durgamati' star hopped on to Instagram and shared photographs in red designer, slit dress and soared the temperature. Donning a low make-up look, Pednekar looked stunning as she effortlessly posed for the camera. With her hair tied high in a messy bun, the actor sported red high heels and personified beauty in her gorgeous snaps.
Along with the pictures, Pedenkar revealed her current favourite song is 'Mirchi' by rapper Divine. 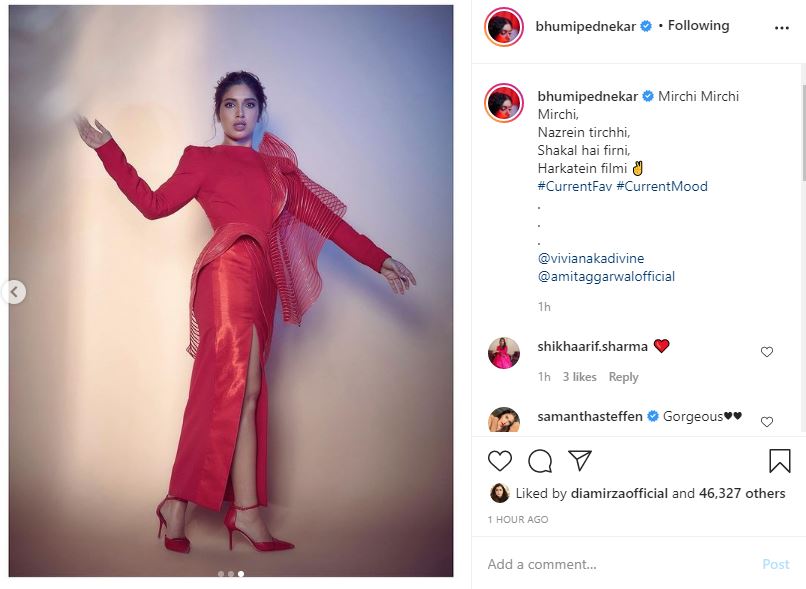 "Mirchi Mirchi Mirchi,Nazrein tirchhi,Shakal hai firni,Harkatein filmi, #CurrentFav #CurrentMood," she wrote in caption.
Celebrity followers including Dia Mirza and more than 46 thousand fans liked the post within 45 minutes of being posted.
Adoring the beautiful pictures of the actor, fans left red heart and fire emoticons in the comments section.
Of late, the 'Bala' star has been quite active on social media and has been updating fans on her activities by posting pictures and videos.
Earlier, on World Energy Conservation Day, climate warrior Bhumi Pednekar stressed on moving towards renewable sources of energy which are clean for the environment. (ANI)