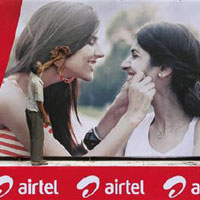 08 November, 2014
Print this article Font size -16+
Bharti Airtel Ltd's shares gain 5 per cent on hopes of better-than-expected earnings for January-March, taking cues from Idea Cellular Ltd which beat March quarter earnings estimates. Idea is much smaller than Bharti in revenue terms, but both mobile carriers operate on GSM technology and have similar kinds of subscribers. As well, both companies' mainstay is second-generation (2G) voice although there has been a greater push in recent months to increase revenue from mobile data.

"Idea's numbers are positive ... for Bharti Airtel. They imply that the subscriber growth would normalise," said an analyst tracking the sector. Idea shares were up 7.6 per cent at 11.43 a.m.

Telenor, one of Europe's best performing telecom firm, sees full-year organic revenue growth in a 2-4 per cent range, below an earlier guidance for 3-5 per cent, even as its margin and expense outlook remained unchanged.

"It is worrying that the growth in Asia is so low and that the company is forced to adjust its guiding already in the first quarter, after just a few months," said Espen Torgersen, an analyst at Oslo-based Carnegie.

"It is a sign of weakness in a company like Telenor, which is seen as a growth case."

Telenor share have risen 27 per cent over the past year, outperforming a 5-per cent rise in the broader telecoms index, thanks to its exposure to the Nordics' relatively healthy markets and Asia's fast growing economies.

In the first quarter, earnings before interest, taxes, depreciation and amortisation (EBITDA) rose 8.5 per cent to 8.42 billion crowns, in line with analysts' expectation for 8.45 billion as key markets like Norway, Sweden and India outperformed, offsetting weakness elsewhere.

Its Indian operations, the firm's Achilles heel over the past several years, continued to erase its losses after Telenor scaled back operations and focused on reducing costs.

The Indian unit has never made a profit and drained Telenor's resources until the turnaround plan was launched.

For the quarter, the Indian unit posted an EBITDA loss of 194 million crowns, a fraction of the 4.68 billion it lost a year earlier and less than the 225 million loss analysts forecast.

Although its revenue was shy of expectations, Telenor raised its margins, helping its bottom line.

Telenor is among the best valued firms in its sector, trading at around 13 times its expected 2013 earnings, well above an average P/E ratio of 10-11 for its relevant peers.