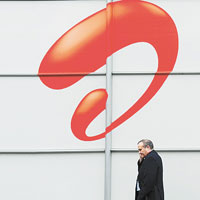 08 November, 2014
Print this article Font size -16+
India’s leading telecom service provider, Bharti Airtel’s wholly-owned subsidiary, Bharti Airtel International (Netherlands) B.V. raised close to $ 2 billion in the largest ever debt issuance by a domestic firm. The two overseas bond issues include $ 1 billion at 5.35 per cent interest due in 2024 and Euro 750 million at 3.375 per cent interest due in 2021.
The lead bankers to the issue are Barclays, Bank of America-Merrill Lynch, BNP Paribas, HSBC, JP Morgan and Standard Chartered Bank. The dollar bond was priced at 270 basis points over 10 year USD Treasury with a fixed coupon of 5.35 per cent per annum. The Euro bond was priced at 225 basis points over 7 year EUR Mid Swaps with a fixed coupon of 3.375 per cent per annum. Says Harjeet Kohli, group treasurer, Bharti Airtel: “We are extremely pleased with the outcome of yet another successful credit offering by the company, which is also the first ever dual tranche offering from an Indian Issuer.”
Post this Bharti Airtel has fully refinanced the original $ 9 billion acquisition of Zain Africa and also taken care of all near term maturities. The net debt of the company at the end of FY 2014 stood at Rs 60,541.6 crore. That could reduce the stress on the company’s balance sheet over the next few quarters.
That is important as Bharti is looking to invest close to $ 1 billion every year in Africa over the next few years. The dollar issue was oversubscribed eight times and the Euro issue 5.3 times.
As things stand, Bharti is the single largest private issuer out of India. That includes $ 5 billion of bonds outstanding, across 5, 6, 7, 9 and 10 years outstanding tenor across USD, EUR and CHF currency base.  In the dollar bond, 51 per cent of the allocation came from the US, 30 per cent from Europe and the balance from Asia. In the Euro bond, 44 per cent was from the UK, 45 per cent from the rest of Europe and 11 per cent from others.
Bharti has been raising bonds regularly to restructure its debt. In February 2013, it raised $1 billion followed by a Euro 750 million bond issue in November. The company then re-opened the issue in January and raised another Euro 250 million.
[email protected]
[email protected]
Tags assigned to this article:
news 6 web exclusives telecom bharti airtel anup jayaram zain africa