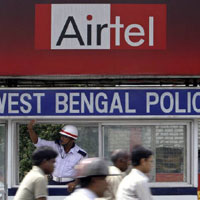 08 November, 2014
Print this article Font size -16+
The Department of Telecommunications (DoT) ordered Bharti Airtel Ltd to stop providing 3G roaming services outside of its licensed zones, said a source with direct knowledge, sending shares of the company down 1.1 per cent.

The DoT also has said Bharti must pay a penalty of Rs 350 crore, the source said.

The government last year barred wireless service providers from offering 3G roaming services outside their areas of service, but a court halted the execution of the order.

Mobile companies in India own 3G licenses only for specific areas of the country and often have agreements with other wireless providers to provide roaming services outside of those areas.

Shares of Idea Cellular <IDEA.NS>, which is also involved in the dispute related to 3G roaming pacts, down 1.2 per cent.