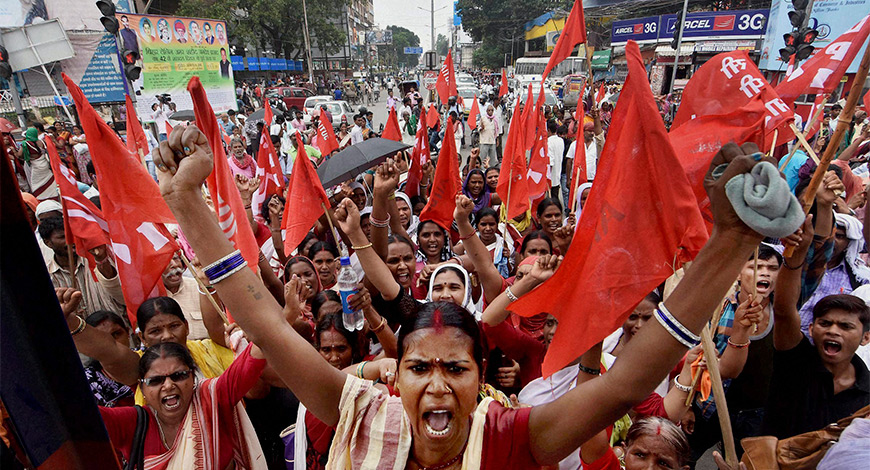 With all-India strike by central trade unions affecting trade, transport, key manufacturing facilities and banking services in Kerala, Karnataka, Tripura, Haryana and Uttar Pradesh besides other parts of the country, the loss to the economy is estimated at between Rs 16,000 to Rs 18,000 crore, according to an Assocham’s assessment.

The strike was called by Central Trade Unions to demand higher minimum wage and social security for the unorganised sector.

Lamenting the fact that India can ill-afford strikes and bandhs as it needs to ramp up its GDP growth by boosting manufacturing and other key sectors like services, the chamber said , reports of production halts in public sector and private sector firms along with stoppage of transport services would damage the pace of growth.

“Trade, transport and hotels form a major part of the country’s gross domestic product. The other major component to the GDP and GVA is the entire package of financial services including banking. Both these key segments have been crippled by the strike”, said Assocham’s secretary general, DS Rawat.

He said, the best course for the trade unions should have been to sit across the negotiating table with the government to reach a middle ground. “The industry is not against fair wages and a decent living standard for the workforce. But the demand for minimum wages should be balanced enough not to lead to a high cost economy”.

The strike, the chamber said, would also leave a crippling impact on the domestic as also export despatches. “For one, in several facilities the manufacturing has been affected. Secondly, in the absence of financial and banking transaction, the entire supply chain gets affected. Then, with transport getting hit, the shipment for exports also gets hit”.

While the strike had a limited impact in Delhi, Mumbai and Kolkata, the problem is that the entire trade chain gets hit with disruption in either of the centres. “Once the goods and services tax (GST) is implemented, the inter-dependence among different manufacturing and trading centres would even go up”, it added.