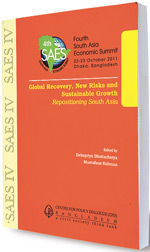 08 November, 2014
Print this article Font size -16+
Centre for Policy Dialogue was set up a couple of decades ago by Rehman Sobhan, an economist with many Indian friends, who felt that good policymaking required a strong local research base and lively discussion. While its focus is on Bangladesh’s macroeconomic problems and policies, it has held a series of economic summits encompassing South Asia. The fourth summit is the source of the volume, Global Recovery, New Risks And Sustainable Growth: Repositioning South Asia, which contains the papers, reports and a review of the conference. The two-day conference saw much action: 55 papers were presented, and in addition, some 25 other speakers participated in panels.

With such a packed programme, papers cannot receive much detailed criticism, so it would be possible to get away with research of little depth. It is uncommon for South Asian economists to spend time doing research in countries not their own; and their libraries are not very rich in material from other South Asian countries. So their knowledge of neighbouring countries tends to be picked up from international organisations’ publications and the Web. But it is heartening to see that a number of participants tried to do serious work and came up with papers worth reading. International statistics are most abundant on macroeconomic variables and trade; papers in these areas are the most detailed. Comparative work on South Asia is extremely promising as the countries are so similar and can learn from their neighbours’ policies, mistakes and experiences. So, it would be highly productive if the governments funded research fellowships for economists visiting from neighbouring countries. None of them does this; so research on South Asia remains shallow and impressionistic. What we need is not conferences of poorly informed economists, but in-depth studies of countries by economists from neighbouring countries. Manmohan Singh is known to be fond of academics and economists; he should increase their utility by financing a South Asian exchange programme.
For his conference on a similar subject, Ejaz Ghani of the World Bank collected 10 South Asia specialists from the bank and from American universities. Their basic sources are not very different; but they had access to well stocked libraries. And they put more energy into simple tabular and graphical analyses of the data. So their papers go beyond generalisations; occasionally they even illuminate the problem. Ghani sets the stage with an opening paper. He sees reason for hope in the demographic dividend, the rise of the middle class, growing globalisation and international labour flows. He is disappointed that services have grown in South Asia and not industry. He sees the bulging informal sector as a trap; but in another paper, he also draws hope from it. He goes back to a 1961 paper of Benjamin Chinitz, who thought that an industrial structure with many small, diverse firms was better for growth than one with a few large firms; India already has the Chinitz type of structure. He thinks South Asia needs to manage its cities better, harness capital and entrepeneurship, and be economical with conflicts.

His authors elaborate on these themes. Bloom, Canning and Rosenberg are not worried about the bulge of youth in the next quarter century; they think it can be turned into an asset by better education and healthcare. But employing them will require good macroeconomic management including, surprisingly, protective trade policies; they think imports are bad for employment. Gu and Prasad are also wary about trade; they favour “management” of the capital account, which is what the Reserve Bank is also keen on. Homi Kharas is not worried about the bulge; he thinks the rising middle class will force the government to improve its policy performance. Özden and Parsons note that South Asia’s youth surplus will coincide with western countries’ youth deficit, and suggest that both should work out a regime of short-term work visas that would take South Asians to the West and relieve its labour shortage. Panagariya notes the failure of workers to move out of agriculture, whose output is growing only slowly, and gives a mélange of policies as the solution — reform of labour laws, bankruptcy laws, land acquisition laws, electricity regulation, and interestingly, trade liberalisation. Lakshmi Aiyar notes the correlation in South Asia between internal conflict and lagging development, which is a bit of a vicious circle.

She has no magic bullet; there are none in this book. But it is nevertheless highly instructive.