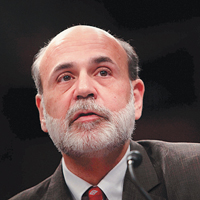 08 November, 2014
Print this article Font size -16+
The wide divergence of opinion within the Federal Reserve over when to wind down its unprecedented support for the US economy was on full display on Friday (12 July), starkly illustrating Chairman Ben Bernanke's leadership challenge for the rest of this year.

St. Louis Fed President James Bullard and Charles Plosser, his counterpart at the Philadelphia Fed, sat on the same panel at a conference here, but sang quite different tunes on what to do about the US central bank's massive bond-buying programme.

"It is time to exit from the asset purchase program in a gradual and predictable manner," Plosser told the 5th Annual Rocky Mountain Economic Summit.

After delivering his speech and fielding a few questions from bankers and economists, Bullard told reporters: "I'd like some kind of reassurance that inflation was moving back toward target" before reducing the bond buying.

It was yet another clue for investors as they try to predict when the Fed will reduce the $85 billion in monthly bond purchases, a policy meant to encourage investing, hiring and overall US economic growth.

According to minutes of the Fed's June policy meeting, around half of the 19 policymakers gathered there expected to end the quantitative easing program (QE) by late this year, while the other half wanted to keep buying bonds into next year.

That contrasts with the conditional timeline Bernanke articulated in a news conference after the meeting on June 19, when he said the Fed's 12-member policy-setting committee expects to end QE by mid-2014, as long as economic growth continues as expected.

While the official statement from the 12-member Federal Open Market Committee made no mention of that timeline, Bernanke said he was speaking on its behalf. The comments prompted a global market selloff, from bonds to stocks to emerging-market currencies, over the following few days.

Markets have since calmed, and Bernanke on Wednesday (10 July) reemphasised the Fed's commitment to accommodative policy.

Only a few months ago, Williams himself had called for a stop to bond-buying by the end of the year.

But inflation has come in lower than he expected, prompting him to make a "small shift" in his own view, so now he fully" supports Bernanke's mid-2014 target.

"We are probably going to need to have more accommodation than I had been thinking a couple months ago because of the inflation data," he said.

But the gap between his current view and his old view, which half the Fed officials share, is not a "substantive difference."

"I don't see these differences as being that big," he said.

Lower-than-expected inflation helped convince him to make that "small shift" in his policy view, Williams said, adding that exactly when the Fed ends the bond buying program is not as important as making sure the high unemployment rate comes down and undesirably low inflation rises back to the Fed's 2 per cent target.

The policy-setting FOMC is made up of more dovish officials than the broader group of 19. Yet the fact that half, and possibly more than half, of the broader group expect the accommodation to end at least six months ahead of Bernanke's timeline could sow confusion in financial markets.

"What we do know is that half of the broader FOMC policy universe wants to end all asset purchases this year and it is a bias hard to dismiss, even if many are non-voters this year," he wrote in a client note.

Inflation A Growing Concern
While Bullard has a vote on policy this year, Plosser regains his vote next year. Bullard dissented at the June meeting due in part to a lack of concern over weak inflation readings.

Inflation as measured by the Personal Consumption Expenditure (PCE) price index is around 1 per cent, below the Fed's 2-per cent goal, despite the bond-buying and four-and-a-half years of near-zero interest rates.

"If inflation went lower than where it is on a PCE basis then the (FOMC) would have to re-think its strategy," Bullard told reporters.

"The simplest thing to do would be to say that we would stick with the QE program for longer ... until we see inflation coming back to target," he added.

Plosser, an long-time critic of the bond-buying, told reporters: "I don't think it has been very effective, I think we are taking huge risks ... I would just as soon unwind from that."

Since Bernanke articulated the QE timeline on June 19, Wall Street economists have increasingly forecast the Fed will reduce the pace of QE at a meeting scheduled for September. There is also one set for the end of this month.

Also since June 19, longer-term market-based yields have risen sharply before more recently shedding some of those gains. Benchmark 10-year Treasury notes slipped on Friday, with the yield rising again to 2.59 per cent.

When To Tighten Policy
Turning to when the Fed should finally raise interest rates, Plosser argued the central bank should commit to tightening policy when the unemployment rate falls to a 6.5-per cent "trigger," instead of just using that level as a rough guidepost for considering a rate rise.

Plosser's proposal, introduced in his speech on Friday, runs against the grain of most other U.S. monetary policy makers, who have increasingly stressed that rates could well stay near zero well after the U.S. jobless rate hits that level.

To clarify its future intentions and to give the economy even more support, the Fed said in December it would keep rates that low until unemployment falls to 6.5 per cent, as long as inflation expectations did not rise above 2.5 per cent. Unemployment was 7.6 per cent last month.

Plosser said these so-called "thresholds," while an improvement, still leave too much room for interpretation. The Fed should "commit to its forward guidance" by treating those levels as "triggers rather than thresholds," he said.

The "FOMC has offered a variety of changing targets or signals about future behavior," he told the conference, which was hosted by the Global Interdependence Center.

"Although the aim was to clarify our policy intentions, I believe the repeated changes have likely caused more confusion than illumination."

The proposal may be a long shot, since influential officials have recently stressed the Fed is in no rush to raise rates.

On Wednesday, Bernanke renewed his message that policy would remain "highly accommodative" and rates could well stay low even after the jobless rate falls below the threshold.

"There will not be an automatic increase in interest rates when unemployment hits 6.5 per cent," he said.

On Friday, Bullard said the Fed could even formally lower that threshold, but added that such a move would require more deliberation.