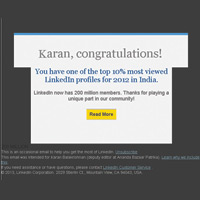 08 November, 2014
Print this article Font size -16+
LinkedIn may have none of the spice and sizzle of Facebook or Twitter, but it is quite obviously doing something right. Fourth quarter results showed revenue that sky-rocketed by 81 per cent year on year to $304 million. Net income grew 67 per cent to $12 million. To many, LinkedIn is the confusing rule-riddled site you go to when it’s time to “move on”. But its recent steps to make it easier for members to use its services, including getting some rather usable mobile app versions, has pleased users as well as investors. Users are touching 200 million and LinkedIn gave the top 1, 5 and 10 percent an ego boost by letting them know they were the top viewed, and seducing them into tweeting about it.

Meanwhile, Pinterest too is updating. It just improved its Android app to make it easier for users to pin with others in group boards. But talking of social apps, the one that is wowing tweens and investors today is start-up Snapchat, which self-destructs photo messages in a time set by senders. It has just got a $13.5 million round of funding and sees 60 million snaps shared a day. Its popularity has forced Facebook to launch a similar app.

Brands
74% of Internet users in India are engaging with brands on social networks, says Ipsos. People under 50 are particularly engaged with brands.

Enterprises
By 2016, 50% of large organisations will have internal Facebook-like social networks, says Gartner. Thirty per cent of these will be considered as essential as email and telephones are today.

LEADER
Anand Mahindra @anandmahindra
Why do we put up with pathetic roads in India? Do we prefer the philosophical state of just ‘Being there’ rather than ‘Going somewhere’?