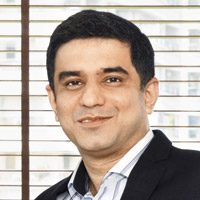 08 November, 2014
Print this article Font size -16+
Rajesh Kamat has a makeshift office in Mumbai’s Taj Lands End hotel. On his worktable, which overlooks a rocky Bandra coastline, is a fascinating array of Ganesha idols. “I add one every time I strike a new deal,” explains Kamat. As CEO of CA Media India, a media fund, Kamat has just picked up a large but undisclosed minority stake, believed to be more than 40 per cent, in Graphic India.
Graphic was launched last year as a comic book and animation content company for feeding multiple online and mobile platforms with stories based on Indian mythological characters. Put together by three young entrepreneurs, the company was initially funded by US comic books company Liquid Comics. It will now be jointly owned by Liquid Comics and CA Media. The company’s current slate includes a partnership with Stan Lee (co-creator of characters like Spider-Man, X-Men and The Avengers) to create an Indian superhero, Chakra — The Invincible.
New age media companies like Graphic excite Kamat. But he had made his mark in the more traditional TV space. Kamat joined Viacom18 in mid-2008 to launch the successful Hindi entertainment channel, Colors, as its CEO. The channel was among the last to vie for the lucrative Hindi entertainment market, but it clawed its way to No. 1 by March 2009. Colors has continued to be a front-runner.
Kamat, just 36 then, decided to quit Colors and Viacom18 (a JV between Raghav Bahl’s Network18 Group and Viacom Inc.) just as the channel turned in its first profit in March 2011. “When Bahl approached me to launch Colors, he asked if I had it in me to play for Rs 1,000 crore. But then I got this chance of working with Peter (Chernin) as an investor, and grabbed it,” says Kamat, describing his transformation from channel head to fund promoter-manager.
“I could have gone on launching channels. The idea of raising money attracted me. I had spent money earlier. Now I am learning to build value,” says Kamat. When he joined CA Media India as CEO in mid-2011, there were four employees and no media fund. He was playing Khatron Ke Khiladi in real life — it was a big risk (he was going in as a promoter); but then the stakes were high.
CA Media has excellent pedigree. Chernin, its founder promoter, before turning entrepreneur, was among the most powerful media executives in the world as president and COO of News Corporation. He then launched The Chernin Group (TCG) in 2009, investing in a host of media and technology companies. Soon after Chernin quit News Corp, Paul Aielo, CEO of News Corp-owned STAR Asia, also exited. They launched CA Media (an abbreviation for Chernin & Aielo) in Hong Kong in 2010, with a focus on three markets — India, Indonesia and China; and they picked Kamat for India.
It was only by the beginning of 2012 that the fund put together its war chest. By then Providence Equity Partners had picked up a small stake in the Chernin Group, and thus became an investor in CA Media with a little less than $200 million. Other investors too came on board, and with around $300 million in the bag, CA Media was in business.
While Aielo opened his account in Hong Kong, buying a mixed martial arts league in China called Legend Fighting Championship, Kamat’s first deal in India was a 49 per cent stake in television content producer Endemol India in April. The company is a subsidiary of the Netherlands-based Endemol, one of the world’s largest producer of TV shows. It was a second home-coming for Kamat — he had set up Endemol in India in 2006. At Colors, he continued to commission shows from Endemol, including the hit Bigg Boss.
Kamat also announced a ‘significant’ investment in music and events company Only Much Louder (OML) in April 2012. OML started as an artist management firm in 2002 and expanded steadily into staging large-format music festivals and managing artists.
More recently, Kamat has launched a CA Media-owned celebrity and brand management company, Fluence, which will operate mainly online as an ‘influencer network’ handling digital endorsements for Bollywood celebrities Amitabh Bachchan, Salman Khan and Karisma Kapoor. “Online platforms and social media have been used as publicity platforms, but digital sales have not been monetised yet. That is the area Fluence in targeting,” says Kamat.
So what is Kamat’s new role? He is fund manager and investor in some companies, but also a hands-on operations guy in others. Endemol’s day-to-day management is run by CEO Deepak Dhar, says Kamat, while he runs Fluence. “We don’t fit anywhere. Are we a fund or an operations company? I am afraid we are neither; we are a hybrid.”
CA Media may have a strong portfolio, but some investor think tanks are not too hot about entertainment and media investments. “Media in India has limited options as it lacks depth,” says Abhinav Dhall, a partner in the Renuka Ramnath-promoted Multiples PE fund, which is also scouting for openings.
Kamat’s bet is that the companies he has acquired or invested in are still to score even as he is confident about the future. “Our next stop is consumer retail entertainment. We don’t mind investing in cable TV either. There are enough shining objects out there.”