Be happy, healthy and strong: Dharmendra to Manoj Kumar on his birthday

Be happy, healthy and strong: Dharmendra to Manoj Kumar on his birthday

Mumbai (Maharashtra) [India], July 24 (ANI): Reminiscing the memories attached with the film industry that they both shared, veteran actor Dharmendra Deol on Friday extended birthday wishes to senior actor Manoj Kumar with a priceless throwback picture.
"Happy Birthday Manoj, be happy, healthy and strong. MANNU, we shared the struggle in this film industry with love and affection," wrote the 84-year-old star alongside a throwback picture on Twitter.
In the monochromatic picture, both the stars are seen holding an award as well as sharing a smile. In the picture, the 'Yamla Pagla Deewana' star is seen dressed up in a suit while Kumar is seen sporting a white shirt and pants.
Sharing that all the memories of the struggling days have been indelible for Senior Deol, he added, "Woh yaaden ....meri zindagi ka ikk anokha issasa.......mujhe hameesha hameesha yaad rahe ga .......love you." 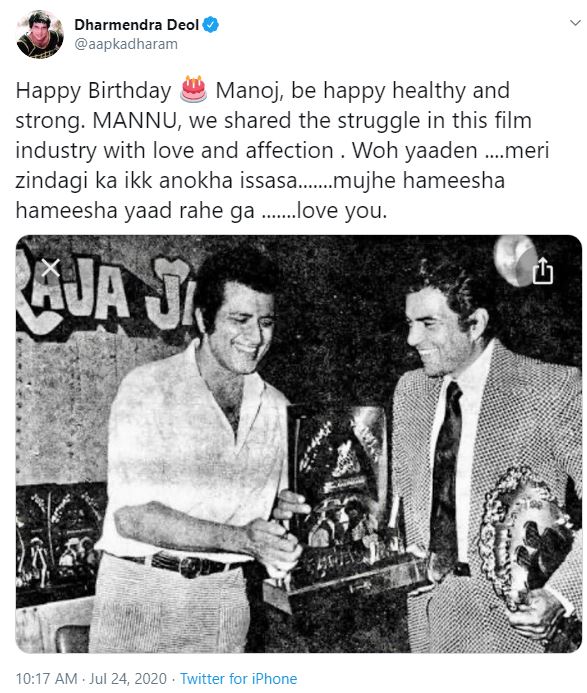