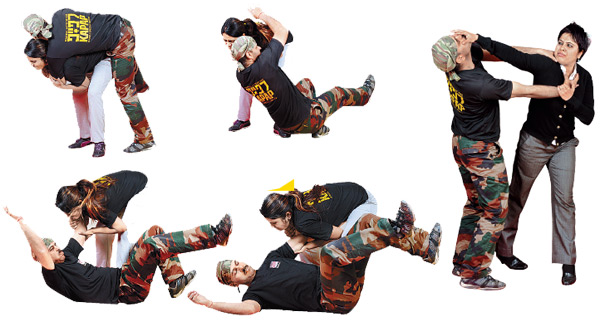 08 November, 2014
Print this article Font size -16+
The past month went by in innumerable discussions on how unsafe Delhi is for women. Endless hours of unsettling thoughts on how it could have been any one of us on that bus that December night.
It was time to take matters into my own hands. I decided the only way to feel safe in the city was to learn some form of self defense. A colleague recommended Israeli martial arts. It sounded dodgy. I was in.
As I traipsed into the basement hall of Fit Comb Training Centre in Gurgaon to attend a trial class, I realised I had not envisioned the seriousness of the matter. There were rubber guns on the floor, not to mention an intimidating group of students who looked like they had walked out of a war movie. I was informed that it was a Kapap class and not Krav Maga, which Fit Comb was previously known for. Both Kapap and Krav Maga are Israeli combat systems that teach self-defense techniques. While the two terms are sometimes used interchangeably, they have basic differences. “While Krav Maga is all about physical combat and is a lot more aggressive, Kapap is more logical. It focuses on concepts which are ever evolving,” says Captain Jaipreet Joshi, a certified Kapap trainer.
A Kapap class starts with a ‘warm-up’, which is only sweet talk for putting your body through a painful half hour of intensive workout. “The aim is to increase the heart rate. Only once it reaches 140-150 bpm, do we start working on the different Kapap techniques. With a relaxed state of mind you can do things better, but the point is to make the setting as real as possible. And when someone is attacking you, you will not be in a relaxed state of mind,” says Joshi.
Kapap, which has recently gained popularity in the country, focuses on biomechanics and attempts to understand human physiology and then use it to one’s advantage when under attack.

There are no restrictions for joining a Kapap class. Says Joshi, “A fit mind and a desire to learn is all we look for.” At the beginner level, the prime focus is on developing endurance. Following that, Kapap classes build up flexibility and body balance. Then they move on to basic standing techniques, teaching students how to stand and move on their feet when in combat. It focuses on a 360 degree defense system, teaching one to use hands, base of the palm, fingers, back of the hands and even how to slap in a more effective way.
Joshi assures me that with regular practice one can reach the level of an instructor within 6 months. But one class had taken its toll on me. By the end of the one and a half hour class, I had been slapped, pulled, pushed and had a rubber gun pointed at me. My body was protesting. Was it worth it? Of course. After all, I had learnt how to defend myself in case someone points a gun at my chest. I think.