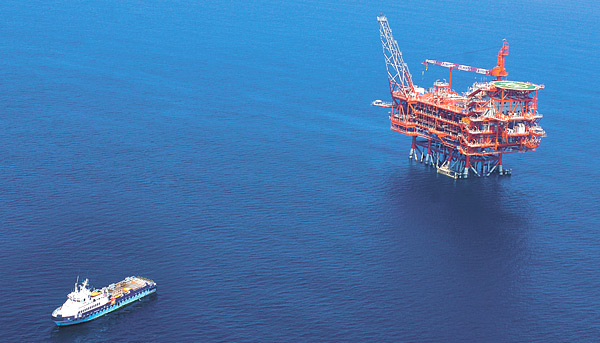 08 November, 2014
Print this article Font size -16+
The country’s largest natural gas reserve at the Krishna-Godavari (KG) basin is losing steam. Natural gas production at the D6 block, controlled by Reliance Industries (RIL), has gone down to 24–25 million standard cubic metres a day (mscmd), down 60 per cent from its peak output. The fall happened as RIL shut six out of the 18 wells due to high water and sand ingress. The expected output from RIL and its partners — BP Plc and Niko Resources — was 80 mscmd of gas.
The situation is going out of control, said an RIL executive, who did not want to be named. “At present, we are not thinking about raising output. We need to at least stabilise the production at 24 mscmd.”
Another company official said that if the decline is not arrested, production will hit zero in a few years. On 9 October, oil secretary G C Chatur-vedi agreed with the analysts, who said that RIL and its partners may have to shut the underperforming D6 fields by 2015–16. A day before, Morgan Stanley analysts had said that the fields could be exhausted in five years.
But low production is just one side of the coin, the other being pricing. RIL had asked the Centre to increase rates from $4.2 per million British thermal unit (mBtu) to import parity rates of around $14.2 per mBtu. Such a rate hike would add around $4.1 billion to RIL’s revenue, making the development of the KG basin more economically viable for it.
Deven Choksey, CEO and managing director  of KR Choksey Securities, says, “The basic fact in this issue is that production from KG D6 is becoming economically unviable at the government-approved price. RIL may not spend further to sort out the technical issues if the government doesn’t revise the gas price in line with the market price.”
RIL says it is also waiting for many government approvals to sort out issues. “The work programme and budget for D1 and D3 discoveries are lying with the government for the last two years,” the RIL executive said. To cut the water and sand ingress, RIL needs to inject mono ethyl glycol (MEG) in the wells and install a booster compressor; it is also looking to convert the oil wells at its MA oilfield in KG-D6 into gas wells. “We need approvals from the government for all these jobs,” the official said.
The government-led management committee has not yet approved the declaration of commerciality of the R-Series cluster comprising D29, D30 and D31 gas discoveries, citing technical reasons. Though the management committee had approved field development investments for D6 for three years in August, RIL is awaiting an official communication from them, said an official.
In January, RIL told the petroleum ministry that the reserves in its main production gas fields in the KG-D6 basin were only 3.10 trillion cubic feet (tcf), about 70 per cent lower than the original estimates, which it blamed on “unforeseen geological surprises” in the field. But government is not buying RIL’s explanation for the fall in production, saying that the company is intentionally keeping the output level low.
“We are not convinced (that the fall is due to geological complexity). The director general of hydrocarbons is not convinced. Therefore, the matter has been referred to arbitrators,” Union petrol and natural gas minister S. Jaipal Reddy said. The ministry has referred the issue to arbitrators.
With the two sides sticking to their positions, the country’s largest natural resource pool looks set to languish indefinitely.
(This story was published in Businessworld Issue Dated 22-10-2012)
Tags assigned to this article:
magazine business nevin john energy and power reliance industries morgan stanley government s jaipal reddy kg d6 bp plc niko resources othertop1 sanjay sakaria magazine 22 october 2012 mbtu kr choksey securities