Washington [US], December 18 (ANI): Former American President Barack Obama on Friday (local time) said that he spent this year binging on TV shows and watching movies due to the pandemic and shared a list of his favorite shows and movies of 2020.
This comes as a part of Obama's annual tradition of sharing his favourite entertainment programs, books, and music from the particular year.
Some of the movies from Obama's favourites include 'Ma Rainey's Black Bottom' Pixar's animated flick 'Soul' David Fincher's 'Mank,' the documentary 'Time,' and Higher Ground Productions' 'Crimp Cramp.'
Other films that were a part of the list were 'Beanpole,' 'Bacarau,' 'Nomadland,' 'Lover's Rock,' 'Collective,' 'Martin Eden,' 'Let Him Go' 'Boys State,' and 'Selah and the States.' 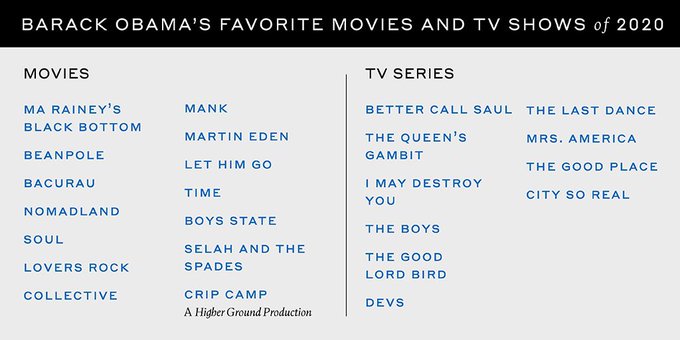 While last year, the former commander-in-chief only picked out three of his favourite television shows, this time he expanded the list.
"With streaming further blurring the lines between theatrical movies and television features, I've expanded the list to include visual storytelling that I've enjoyed this year, regardless of format," he tweeted.
Some of the 2020 released TV series that attracted the former American President include Netflix's 'The Queen's Gambit,' Michael Jordan's 'The Last Dance,' Amazon's 'The Boys' historical miniseries 'Mrs America,' Michaela Coel's transcendent drama 'I May Destroy You.'
Other TV series that were a part of Obama's picks are 'Better Call Saul,' 'The Good Lord Bird,' 'City So Real,' 'The Good Place,' and 'Devs.'
Earlier this week, Obama had unveiled the list of his favourite books from the year which included his own book 'A Promised Land,' and some other books like 'Caste,' 'The Vanishing Half,' 'Twilight of Democracy' among others. (ANI)