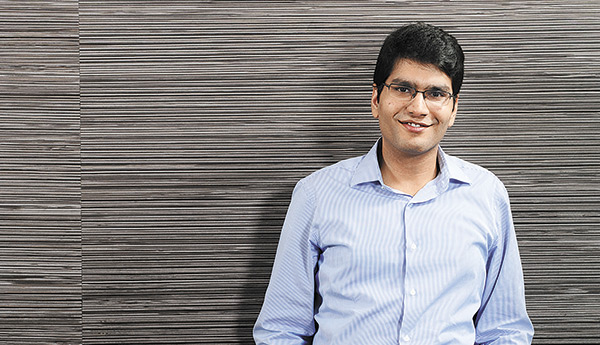 08 November, 2014
Print this article Font size -16+
The story seems predictable. The only son of a business family returns from an Ivy League institution to join the family’s well-established business empire, with a view to being groomed for a leadership position in the group. But, there is a twist in the tale. The father decides to drop his son into the deep end by giving him the “toughest job in the group”.

Speak to Sanjiv Goenka, chairman of the Rs 23,000-crore RP-Sanjiv Goenka (RP-SG) Group, and the reason becomes apparent. While Shashwat will ultimately take over the reins of the business, he has to learn the ropes the hard way to get there. “We are seeing a difficult situation and that is part of business — it will possibly instil in him the ability to take decisions and prioritise,” says Goenka Senior, who claims to be completely hands-off vis-a-vis the retail vertical now. And, given the recent split between brothers Harsh and Sanjiv, this is a crucial time for RP-SG Group to consolidate its businesses, making the need to succeed exponentially more important for Shashwat.

The youngster, all of 24, says, “The single-minded focus as of now is profitability.” Spencer’s has been a struggling enterprise, and hasn’t made a profit since 2006, when the age-old brand was revamped under the RPG umbrella (the first new Spencer’s store was inaugurated in Chennai). Shashwat says the losses are a learning curve for him, teaching him what not to do.

While the losses for Spencer’s have seen a steady decline since 2008-09, when they had mounted to a mammoth Rs 520 crore in that year, profitability continues to be elusive. However, over the years, losses have come down, and as of 2012-13 stand at Rs 78 crore (see Store Stats for a comparison of key players in Indian organised retail). Also, in the first six months of 2013, Spencer’s revenues have risen almost 27 per cent, to Rs 714 crore.

“Retail in India is still largely an entrepreneurial exercise, where one has to take decisions on a per-store basis. There’s no one-size-fits-all formula,” says Sanjiv explaining why he wants his son to make Spencer’s his learning ground. “For a long time we just couldn’t figure out what formats worked best for us, or even what geographies,” says Shashwat. This was no different to its peers like the Future Group and Reliance Retail, which were all expanding across formats and sizes between 2006 and 2008. Spencer’s, for example, opened six stores in Pune in quick succession. It was then forced to close these and exit the city altogether, for want of demand. The same was the case with the supermarket format. Over the past year, the firm has closed over 150 supermarkets.

So, what does Goenka Junior plan to do? “We’re done with consolidation. We won’t close more stores; all growth will come from the hypermarket format.”

Taking Control
Shashwat prefers a more hands-off approach, and currently bridges the gap between the CEO and the board, says Mohit Kampani, CEO, Spencer’s. Since he took over, decisions-making is faster, budgets are usually approved, and the hiring-and-firing policy is more regulated.

Shashwat claims to have a clearer idea in terms of format, geographies and product mixes now. He wants to focus on ‘compact hypermarkets’ for Spencer’s. While the global standard for a hypermarket is a store in the 60,000-200,000 sq. ft range, the Wharton graduate says that this will not work in India given its space constraints and high rentals. The company will instead focus on hybrid, compact hypermarkets. It plans to invest around Rs 600 crore over four years to open 80 such stores, which will be more in the mould of a typical supermarket, at an average size of 18,000 sq. ft.

He seems to be on the right track, as others too are heading the hypermarket way. Robert Cissell, CEO of the value retail format at Reliance Retail, had previously told BW | Businessworld that while hypermarkets are the way to go in metros and bigger cities, smaller supermarkets (around 12,000 sq. ft) would do well in smaller towns. So, a middle path just may be the shot in the arm that Spencer’s needs. “In large formats, the margins are better, footfalls are high and shelf-space is large,” Cissell said, adding that all retailers had realised this.

“The margins of food, in such a format, are about 20 per cent higher for us than they are in smaller stores,” says Kampani, who replaced Vineet Kapilla as head of Spencer’s in December. Kampani echoes Shashwat’s sentiments on profitability, adding that Spencer’s has managed to turn profitable at the store level, in terms of revenue per sq. ft; now, the aim is to turn around the overall profitability, which takes into account costs on marketing, logistics, etc., “within the next five quarters”. While the advantages of this strategy, in terms of display space and rentals, are clear (analysts suggest that there is a 5-7 per cent rent cost advantage of a bigger space), the contrarian view is that the long queues may dissuade buyers. Future Group’s Big Bazaar format is the only one with a similar store size in the 20,000-25,000 sq. ft.

Shashwat also intends to reduce Spencer’s dependence on food, which currently accounts for 80 per cent of its revenues (the rest coming from apparel, etc.). The ratio, he says, is being changed to 65:35 in favour of food. He claims to have already put in place an action plan to ensure that Spencer’s has a better product portfolio in general merchandise categories, including apparel.
break-page-break
This is also in keeping with the trend in the organised retail industry. After the 2008 global financial meltdown, Indian players were saddled with slowing sales, dipping profits, increasing costs and higher debt servicing charges. Last year, the Indian retail industry was pegged at $600 billion, of which organised retail was just 8 per cent. Players such as Reliance and Future Group are now coming around to a two-pronged strategy: groceries/food and apparel/fashion. Future Group, for example, is setting up a consolidated back-end processing chain for food. Damodar Mall, head, customer strategy and special projects, Reliance Retail, who was with Future Group till 2012, says margins remain high in food, especially premium food, but volumes are far from ideal.

According to a recent Deloitte report, organised retail is likely to have a 20 per cent share of the Indian retail market by 2020. Food/grocery contributes about 60 per cent to organised retail, while apparel about 8 per cent. A 2011 report by Business Monitor International predicts that mass grocery retail sales in India will grow by 218 per cent and reach $27.67 billion by 2015.

Road Ahead
To rope in the new-age shopper, Shashwat has borrowed the concept of Live Fresh from the UK and US retailers — food experience zones where people can get fresh vegetables chopped and taste the food before buying. “Shopping in a hypermarket isn’t just about getting stuff, it’s an experience, an outing for the family. I hope to cash in on this by creating experience-based food zones.”

On the back of such initiatives, private labels that currently contribute about 15 per cent to the company’s revenues are likely to raise their stake in overall revenues to about 25 per cent over the next two years, says Pinakiranjan Mishra, partner and national leader, retail andconsumer products, EY.

For Shashwat, while the assignment is admittedly difficult, the fun, he says, is in the challenge. “There is so much happening in Indian retail — FDI coming in, growth in organised retail and various formats to contest with.” Profitability is what the RP-SG Group heir apparent is targeting. Onlookers, including former employees, say it’s clear that there is some purpose to the way he’s handling Spencer’s, which has thus far had a rollercoaster ride — with private equity deals, FDI, experimentation with multiple formats and frequent high-level executive exits. In the past few years, Spencer’s had already begun to witness a turnaround of sorts. It will be interesting to see whether this a young hand at the helm of affairs will take the brand out of the red. But then, that may take a couple of years yet.

As for future challenges, given that the much-needed decision to shut down the Music World stores was taken under Shashwat’s leadership, he seems up for the tasks ahead. Moreover, as he says, “I’m quite looking forward to dealing with (the challenges).”