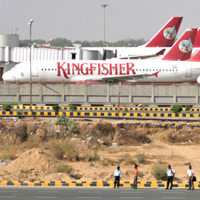 08 November, 2014
Print this article Font size -16+
State Bank of India on 6 October said Kingfisher lenders have decided to release funds to the debt-ridden airline on "humanitarian grounds" considering that its employees have not been paid fpr the past seven months.

"The money that has been released by the tax authorities, 80 per cent of that will be made available to the company on humanitarian grounds, specifically to pay salaries of the employees," SBI chairman Pratip Chaudhuri told reporters here.

Sources had said bankers after an emergency meeting on 5 October had agreed to release funds from escrow accounts, which is likely to fetch up to Rs 60 crore for the carrier.

SBI heads the consortium of 17 lenders to the crippled carrier. Chaudhuri, however, did not divulge the total quantum of the money banks were having.

Collectively, the 17-bank consortium has Rs 7,000-crore outstanding to the Vijay Mallya-promoted airline.

The SBI chief said that he does not know how much of a solace this would offer. "I don't know how adequate that (the release of money) would be."

The wife of a Delhi-based technician of the airline, which has been grounded since Sunday following a strike by its engineers and a section of pilots, allegedly committed suicide yesterday due to the financial troubles in the family and blamed the airline for it in a suicide note.

The Aviation Ministry and the sector regulator DGCA have been insisting to keep the fleet grounded unless concerns around safety and wages are solved.

The striking employees have been asking for an immediate payment of salary for three months out of the total seven months outstanding for resuming duties.

"If we pull the plug now then all possible investors would also walk away. Having waited for so long we might as well wait some more time," Chaudhuri said.