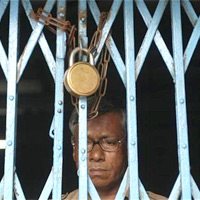 08 November, 2014
Print this article Font size -16+
About one million Indian bank employees began a two-day strike on Wednesday to protest against reforms that could ease mergers rules and allow more private capital into the sector, hitting banking transactions and some market trading operations.

The strike, involving mainly the staff of state-run banks that make up around 70 percent of the sector, came a day ahead of an expected parliamentary approval to some changes in rules to allow bigger role for investors in banks.

Foreign ownership of Indian public sector banks is capped at 20 percent, and some global banks have been pitching for a hike in their holding limit to help them expand their presence in Asia's third-largest economy by acquiring the smaller regional banks.

India has struggled to reform and liberalise key sectors such as banking, retail and insurance, partly because of political opposition and fears of the exploitation of domestic interests by foreign investors.

The strike, which forced No. 1 lender State Bank of India to halt trading in onshore spot foreign exchange markets, comes as another blow to the economy that faces its worst slowdown in almost a decade.

"Any move towards increasing the private sector role in the banking sector is a big fear for the unions and that makes them oppose it," said D.H. Pai Panandiker, the head of New Delhi-based think tank the RPG Foundation.

"The changes in the banking laws can improve the health of the banks quite considerably," he said. "The unions fear if the government continues with the reforms their positions will weaken and it will lead to job losses."

Parliament is likely to approve on Thursday amendments to banking laws that include raising shareholders' voting rights limit in private banks to 26 per cent from 10 per cent, a senior government source said.

The amendments, which were earlier expected to be approved on Wednesday, will meet a major demand of foreign investors seeking more say in the country's financial system, though it is unlikely trigger fresh private investment in the sector and the 20 per cent cap on foreign ownership in public sector banks will not change.

Analysts say the approval by parliament of the banking legislation amendments would be seen as a positive step by investors and would ease fears of "policy paralysis" in a government that has seen its free market reforms stall.

Deserted Look
It was not immediately possible to assess the financial losses due to the strike, though trading volumes in government bonds were thin at Rs 2360 crore as against the average Rs 4000-5000 crore in the first hour of trade.

Public sector State Bank has halted trading in onshore spot foreign exchange markets as its settlement operations' staff have not yet shown up for work, sources said, adding the bank could start trading later in the day if the situation improves.

In many cities across the country, bank branches were shut as thousands of employees, many brandishing banners, congregated in a large pickets and shouted slogans against the reforms in the financial sector.

"Unless the government relents or the government gives some positive response, we are going to intensify our agitation," said J.P. Sharma, vice president, All India Bank Employees Association.

Many public sector banks in Connaught Place, the commercial hub of the national capital New Delhi, saw only two or three employees trickle in for work early on Wednesday, while many joined their colleagues outside the branches.

"Both sides suffer. The public is inconvenienced and we also lose our daily clients," said Shashi Sharma, chief manager of state-run Punjab National Bank, sitting in a dimly-lit vacant office.

In Kolkata, almost all public sector banks were shut on Wednesday, as some employees shouted slogans against the government policies outside their offices and others join in a protest march.
Tags assigned to this article:
top 1 strike investors reforms bank employees mergers rules