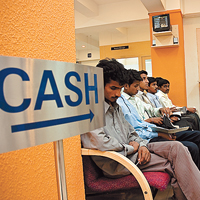 08 November, 2014
Print this article Font size -16+
Companies looking to set up India's first new banks in nearly a decade have a long and costly road ahead of them.
While corporate heavyweights from the Tata, Birla and Bajaj groups to Anil Ambani's Reliance Capital are among those applying for the right to establish full-fledged banks, the pool of 26 hopefuls was smaller than analysts had expected.
Stiff requirements on branch placement and liquidity make for an arduous path to profitability and scale, and have deterred some would-be applicants.
"It will require a considerable amount of marketing expense, branch expansion," said Vijay Mahajan, founder of microlender Basix, which considered applying for a licence but did not.
"You have to be profitable at the same time. If you have a bank which has losses for seven years continuously, nobody will put their deposits there."
Banks must keep 27 per cent of deposits at the RBI and in government bonds, even in their startup years. That means they can lend only 73 of every 100 rupees raised in deposits.
One in four branches must also be set up in rural areas where no bank now exists - an expensive endeavour.
While those requirements are the same for existing lenders, the rules were implemented after incumbent banks had already built scale. For example, the rural branch criterion only applies to new branches.
One blue chip corporate house expected to be among the front-runners for a licence opted against applying.
Mahindra & Mahindra Financial Services, a non-bank finance company (NBFC) and part of the Mahindra Group, said it was put off by the liquidity rules and the requirement to convert all existing branches to full-service bank offices within 18 months while at the same time setting up new rural branches.
Cheap Deposits
The lure of banking is the ability to raise low-cost deposits and generate fat margins. Net interest margins for Indian private sector banks are around 3.5 per cent, among the highest in the world.
Gathering retail deposits requires building up a branch network.
Yes Bank, which opened in 2004 and is the last new bank in India, has said it wants to have 900 branches by 2015. With 430 branches at the end of March, it would need to rapidly accelerate openings from its annual average pace of 56 over the last four years.
Yes Bank generates 18.9 per cent of its deposits from current and savings accounts. For mid-sized banks in India, the average is 28-30 per cent, said Manish Ostwal, an analyst at KR Choksey Shares & Securities.
But to lure depositors, new banks like Yes Bank need to offer higher deposit rates, eating into the margins they earn from lending.
Yes Bank, Kotak Mahindra Bank and IndusInd Bank, among India's newer banks, pay 6 to 7 per cent interest on savings deposits. Most Indian banks pay 4 per cent.
As a result, Yes Bank's cost of funds - what it pays in interest to depositors and through borrowings - was 8.6 per cent in the fiscal year that ended in March, while IndusInd's was 8.5 per cent. The average among the three biggest private sector banks was about 6.4 per cent.
Like existing lenders, new banks will also have to make 40 per cent of their loans to the "priority sector," including small businesses, retail traders and agriculture, which tend to generate smaller margins than other loans.
"Profitability will take a dip, it will take four to five years to get to the same level of profitability as we are now," said Nirmal Jain, chairman of India Infoline, a brokerage that applied for a bank licence.
The central bank has not said how many licences it will award, although the number is widely expected to be around five and the winners are expected to be named in 2014.
Besides the usual corporate heavyweights, strong candidates include L&T Finance Holdings, part of India's largest engineering conglomerate Larsen & Toubro, as well as Shriram Capital, part of one of India's biggest NBFCs.
Some applicants roped in big names to bolster their chances.
JM Financial has tied up with former Citigroup CEO Vikram Pandit. Reliance Capital lined up Japan's Sumitomo Mitsui Trust Bank and Nippon Life Insurance to own between 4 and 5 per cent each.
"We are going for it because banks are much better placed for long-term growth. It's a much better source for raising funds and it's a stable business," India Infoline's Jain said.