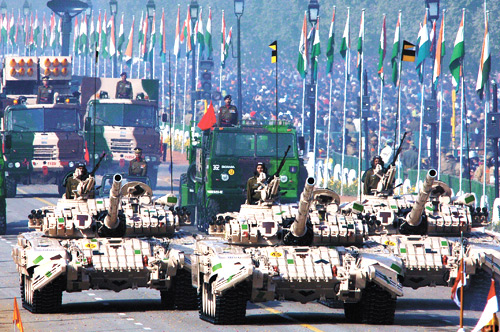 Still, there is enough optimism among bigger domestic private sector players such as Mahindra Defence Systems, part of the $14.4-billion Mahindra Group. The company recently entered into partnerships with Israel's Rafael Advanced Defense Systems and the American Telephonic Corporation, makers of communication equipment. "The government's intent is very good. From 30 per cent indigenisation, it is keen to move to 70 per cent indigenisation. But it has to increase the clarity on project timelines. Companies need to know in advance about opportunities so that they can invest adequately in manufacturing capabilities," says Brig. Khutub Hai, CEO, Mahindra Defence Systems. "We feel that partnering with global defence corporations works very well. Indian companies get knowledge and technology. And the foreign companies get access to Indian market," he adds.

There are others who vouch for the private sector's potential. "India is more than capable of creating a world-class defence manufacturing industry. But India will have to improve industry governance rules, dedicate more resources to R&D and invest in skills," says Paul J. Kern, a retired general of the US Army who is now senior counselor in Washington DC-based strategic consultancy The Cohen Group.

A KPMG research shows that deals worth $24.66 billion have been signed by the Ministry of Defence (MoD) with global integrators over the past 48 months and another $41.99 billion worth of deals are in the process of being signed. More will be announced in the next few months. India could spend about $80 billion by 2015 on defence buys.

This offers a great opportunity for foreign and domestic players to ratchet up manufacturing in India. As part of the production of six Scorpene SSK submarines under licence in India, the French manufacturer DCNS is investing heavily in Indian industry supply chains in order to gradually produce many parts for the submarines indigenously. DCNS has already signed contracts with Flash Forge and SEC Industries, and many more such deals are in the pipeline. "The potential for France to collaborate with Indian companies and organisations to boost domestic production of defence equipment is more than a prospect. It is already a reality," says Francois Richier, the French ambassador to India.

In February, India chose France's Dassault Aviation as the preferred bidder for a $10-billion contract to supply 126 Rafale aircraft to bolster its fleet of MiG-29s, Mirage 2000s, Jaguars and Su-30MKIs. India will buy the first 18 fighters directly from the manufacturer, and the rest will be built under licence, with transfer of technology, at the Bangalore-based Hindustan Aeronautics.

break-page-break
Richier informs that several projects leading to co-development and co-production of state-of-the-art defence equipment in India are also being actively discussed with the MoD, the Defence Research and Development Organisation (DRDO) and the armed forces. "Furthermore, transfers of technology and offsets associated with the production of 108 Rafale ‘omnirole' aircraft in India will definitely help the Indian defence industry reach world standards and become a prominent player in the area of defence technologies."

New Prospects
Apart from the Western arms companies, even the Japanese are getting excited about India. Conglomerates such as Mitsubishi, Kawasaki and Sumitomo that have a presence in India are yet to enter the defence sector but are watching it very carefully. The test case would be ShinMaywa Industries, the $5-billion group that makes amphibious planes and special purpose trucks apart from other engineering systems. ShinMaywa is among the bidders for the Indian Navy's $2-billion contract for amphibious aircrafts.

Says Commodore (retd) Sujeet Samaddar, CEO of ShinMaywa India, "Our company plans to have the highest level of indigenisation for our planes in India. We are confident about Indian manufacturing capabilities. Our experience can encourage other Japanese companies to expand in the defence sector." ShinMaywa participated in the Defence Exposition in Delhi in early April, becoming the first Japanese company to do so.

For Japanese and other companies to invest in India some critical changes are needed. "We are seeking a few changes: relaxation of FDI in defence to 49 per cent from 26 per cent on a case-to-case basis; liberal funding of R&D in defence; creation of a level playing field for the private sector, especially in terms of taxation and customs regime," says Gurpal Singh, deputy director general and head of defence and aerospace, Confederation of Indian Industry.

India has a robust manufacturing base of ancillary industries in the small and medium sector that need to be taken to the next level of sophistication. Domestic conglomerates such as the Tatas and the Mahindras will need help from this sector. Says Richard Rekhy, head of advisory at KPMG India, "Experienced Indian manufacturers with a diversification interest in aerospace and defence may look at partnering or even acquiring some of these SMEs, most of who are brimming over in capacity and capability." He believes that would be a win-win for both parties. "The SME could get a window in the larger game with foreign integrators and enable the Indian giants to get a foot in the door of the mammoth opportunity that Indian aerospace and defence is set to provide," says Rekhy.

India would do well to emulate China's example of aspiring to be a top exporter, since domestic manufacturing will clearly help in employment generation. About 1 lakh direct jobs would be created with increasing indigenisation, while about 5 lakh indirect jobs could be created in the ancillary and supporting sectors.

But most importantly, indigenisation could lead to faster acquisition of defence equipment, and with higher domestic procurement, the transparency levels too would increase. And kickback charges could reduce. The government must now have more faith in domestic manufacturing than in foreign imports.