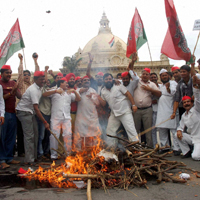 08 November, 2014
Print this article Font size -16+
A bandh called by NDA, Left parties and SP to protest against diesel price hike, FDI in multi-brand retail and cap on subsidised LPG on 20 September evoked mixed response as protestors disrupted road and rail traffic in parts of UP, Bihar, West Bengal and Odisha but it had little impact in Mumbai. In Delhi, most of the markets remained closed and vehicular movement was normal though protesters blocked traffic at some places.
Shops in some areas like Bhogal, Laxmi Nagar, Defence Colony and South Extension in the capital were open in the morning hours but though big markets like Khan Market, Connaught Place, Greater Kailash, Karol Bagh, Chandni Chowk and Kashmere Gate were shut. Auto rickshaws plied in the city and buses of state-run Delhi Transport Corporation (DTC) were on the roads in large numbers. At New Delhi railway station, auto drivers staged a protests and refused to carry passengers. However, most of the private schools in Delhi remained closed.
Schools, shops and government offices were shut in some states as protesters blocked road and rail traffic as part of a one-day nationwide strike against sweeping economic reforms announced by the government last week.

The main opposition Bharatiya Janata Party (BJP), joined by smaller parties from both the political left and right, called for the strike to protest against a 14 percent hike in heavily subsidised diesel prices, and a government decision that opens the door to foreign supermarket chains to invest in India.

The measures, part of a package of big-bang economic reforms aimed at boosting a sharply slowing economy, have triggered a political firestorm. Prime Minister Manmohan Singh's biggest ally pulled out of his shaky coalition on 18 September, raising the risk of an early election.

Bangalore, the IT and outsourcing hub, was hard hit by the strike, but in the financial capital Mumbai, banks and offices were open as usual. In New Delhi, shops were shut in BJP constituencies and there were fewer cars on the road but the central business district was untouched.

Across the country, morning commuters were left stranded at train stations and bus-stops as protesters squatted on railway tracks and laid siege to some bus depots. Supporters of the right-wing Hindu nationalist BJP and other opposition parties also blocked some roads with burning tyres.

"If we don't protest now, the central government will eliminate the poor and middle-class families," said Santi Barik as she protested in Bhubaneswar, Odisha.

Government offices, businesses, schools and banks in Bhubaneswar were shut, and similar shutdowns were reported in other cities, including Hyderabad, the IT hub in Andhra Pradesh that is home to local offices of Microsoft Corp and Google Inc. Police arrested dozens of opposition supporters who surrounded the biggest bus station in Andhra Pradesh.

In Bangalore, most of the 3,500 staff employed by Intel Corp and 10,000 staff at Cisco Systems Inc were asked to work from home, company spokesmen said. Infosys Ltd and Wipro Ltd gave workers the day off, but will ask them to work on Saturday instead.

The Congress party-ruled coalition, which has a record for buckling under pressure, partially rolled backed a petrol price increase earlier this year after facing a similar strike. Some Congress officials have hinted the new 5 rupee per litre diesel price hike could be cut, and a new limit on subsidised cooking gas cylinders may also be raised. But they have held firm against calls for the retail reform to be scrapped.

The BJP is seeking to exploit popular anger against the diesel hike and retail reforms - which many mom-and-pop store owners fear will destroy their livelihoods - ahead of a series of state elections later this year and national elections due by 2014.
The bandh evoked little response in Mumbai owing to Ganesh festivities across Maharashtra. Shiv Sena and Maharashtra Navnirman Sena (MNS) have kept away from the day-long bandh due to the festival.
Road and train services were also hit in several parts of Bihar. A group of BJP workers blocked rail traffic at Patna junction and stopped movement of a number of long distance express and passenger trains. Life in the Kolkata and elsewhere in West Bengal was disrupted due to the 12-hour bandh called by Left parties.
Though airport services were normal, train services in Eastern Railway and South Eastern Railway were disrupted, officials said. Howrah-Pune Duranto Express, which started from Howrah on time, was stopped by the squatters here, railway sources said. Services of the Metro rail, Kolkata's lifeline, were normal, officials said. Airport sources said the flight operations were normal in Kolkata airport, except cancellation of two Indigo flights - Kolkata-New Delhi and Kolkata-Agartala which were scheduled to fly in the morning.
Normal life was affected in Odisha, barring the western region, due to disruption in train and road traffic during the bandh called separately by BJP and Left parties to protest the recent decisions of UPA government.
While state government offices, banks and insurance services remained closed on the occasion of "Nuakhai", a major festival of western districts of the state, organisers of the dawn-to-dusk shut-down have kept the celebrations out of the purview of the protest.
In Karnataka, the bandh affected normal life as shops and offices chose to remain shut. Only essential commodities like milk and medical services are available but all schools and colleges were closed. The Secretariat in Bangalore wore a deserted look but the high court and lower courts were functioning.
In Congress-ruled Rajasthan, the bandh call got a mixed response. In Jaipur, major markets and business establishments remained closed and public transport was hit partially as many private buses and autorickshaws remained off road.
(Agencies)
Tags assigned to this article:
economy india top 1 fdi congress nda fdi in retail diesel price hike bandh