Ban On Anti-Diabetic Drug Likely To Be Lifted 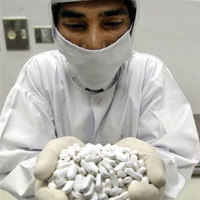 08 November, 2014
Print this article Font size -16+
The controversial ban on anti-diabetes drug Pioglitazone may soon be lifted with Health Ministry's apex drug advisory panel recommending such a course in the wake of opposition from various quarters.

The Drug Technical Advisory Board's recommendation comes over a month after the Ministry imposed a ban on the drug, suspending the manufacture, sale and distribution of Pioglitazone and all formulations containing it.

The relook on the ban came after the government went on the backfoot following hue and cry from pharma industry and medical fraternity against the "hasty" decision of the government which had bypassed the Board. The drug was being used by over lakhs of people in India and was much cheaper than its alternatives.

Following representations from various quarters, the matter was referred to the drug advisory board which met today under the chairmanship of Director General of Health Services Jagdish Prasad and decided that the ban be revoked on the drug, highly placed sources said.

The Board has now recommended to the government to revoke the ban as a large number of people across the country use the drug and other alternative drugs are much more expensive, they said.

It also discussed that there was no scientific data to prove the link of the drug to urinary bladder cancer and asked the drug regulator to carry out such studies, the sources said.

Pioglitazone is banned in France but sold in the US and Europe with a warning. India is also contemplating having a similar warning with the drug.

The Drug Controller said the ban was reviewed in the interest of patients who use the drug as it is cheaper but insisted that patient safety is foremost in the mind of the ministry.

The Ministry had banned the drug after a recommendation from the Central Drugs Standard Control Organisation (CDSCO).

A Chennai-based doctor, V Mohan, had petitioned the drug controller general to ban Pioglitazone after eight cases of adverse effects of the drug causing potential risk of urinary bladder cancer were reported in the southern city.

He, however, later said he did not have scientific data to prove that. Mohan courted controversy as his Diabetes Education Academy is running a certificate course which has been funded by a drug major for the past two years.

The government took cognisance of the concern and banned the drug on June 18 without consulting the Drug Technical Advisory Board (DTAB).

After protests from doctors, experts were called to take a review on July 11 and the matter was referred to the Drug Advisory Board.

The Indian Pharmaceutical Alliance had also hit out at the Health Ministry's ban on Pioglitazone, saying it was done "without following due process and scientific enquiry".
Tags assigned to this article:
news 9 pharma cdsco health ministry anti diabetic drug pioglitazone banned drug drug technical advisor board