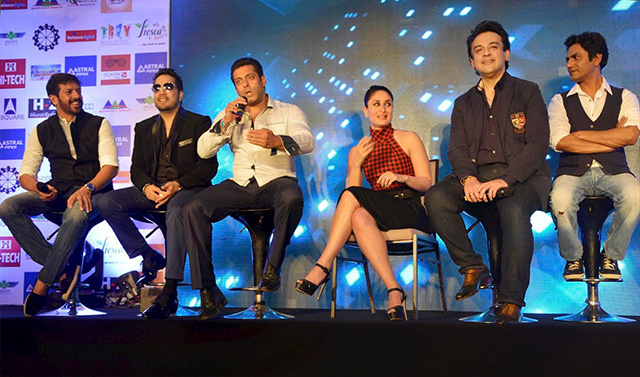 In a partnership with POGO and Cartoon Network, Bollywood actor Salman Khan, will be featuring in new TV shows created especially for kids. Selfie Le Le Re with Kris and Salman will premiere on 18 July, 2015 at 12 pm on Cartoon Network and Bheem aur Bajrangi Bhaijaan will premiere on 19 July 2015 at 12 pm on POGO. Both TV contests will give kids the opportunity to win prizes including a chance to watch the film Bajrangi Bhaijaan before its release.

Selfie Le Le Re with Kris and Salman - 18 July 2015 at 12 pm
Salman Khan will help Cartoon Network's character Kris realise his dreams of being a superstar one day. Kris has an exciting life in school but would love to learn the tricks of the trade - be it dance, action, comedy or drama. Salman Khan will give him some tips on how to be a superstar? In this 90-minute special, Salman and Kris share insightful anecdotes and feature in the music video of 'Selfie Le Le Re'.

Kids can also be a part of the promotion activity by participating in the Selfie Le Le Re with Kris and Salman contest on 18 July 2015 on Cartoon Network. They have tune-in to the special and answer the contest question to win a chance to get a selfie with Kris.

Bheem aur Bajrangi Bhaijaan - 19 July 2015 at 12 pm
This 90 minute special on POGO will see Salman Khan drawing parallels between his character in the film and TV character Chhota Bheem. Both are heroes to millions in India.

Both will also dance in a special music video that will air on POGO.

POGO is giving 100 lucky kids a chance to watch Bajrangi Bhaijaan before its release in theatres.