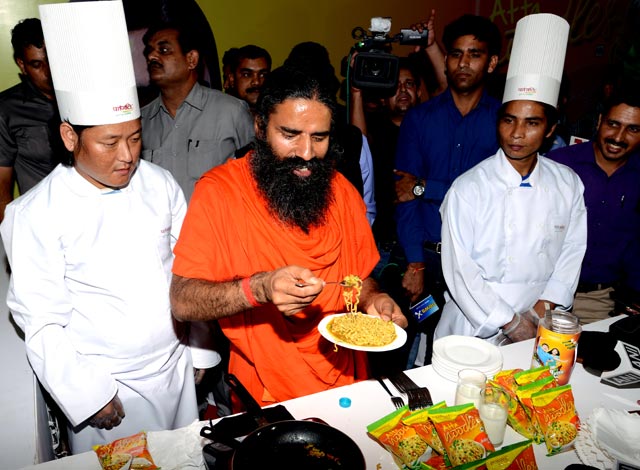 The "atta" noodle has been priced at Rs15 for a 70-gram pack.
"It is Rs 10 cheaper from our rivals noodles, which are selling atta noodles at Rs 25," he added.
"By the end of December, our noodles will hit one million stores. We are ramping our production capacity," Ramdev told reporters.
Last week, Nestle India had relaunched its Maggi noodles in the market last week after Bombay High Court had lifted ban on it imposed by FSSAI and Maharathstra FDA.
Ramdev said the company Patanajali Ayurved would also foray in childcare, cosmetics products and health supplement by the end of this year.
"We will launch baby care under 'Shishu Care' brand, beauty care products under 'Saundrya' brand and health supplement powder under 'Power Vita' brand by the end of December," he said.
The catchline of the Patanjali noodles is "Jhat pat pakao, aur befikr khao".  Patanjali officials said the product has been developed by a 'strong research team', adding that the noodles are made with rice bran oil using dehydrated vegetables.