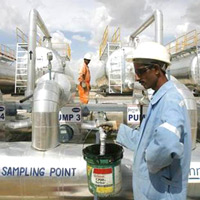 08 November, 2014
Print this article Font size -16+
State-run Bharat Petroleum Corp plans to shut a diesel hydro desulphurisation unit (DHDS) at its Mumbai refinery for about a month of maintenance in November, a company source said on Monday, 1 April 2013.

"We have to replace catalysts at both the reactors in the unit to improve yield," said the source, who did not want to be named as he is not authorised to speak to the media.

BPCL is operating the unit, which removes sulphur from high sulphur gas oil, at 6,000 tonnes a day, although its capacity was recently boosted to 10 percent higher than that.

Diesel demand usually climbs towards year-end as Europe imports additional cargoes of the heating fuel during winter. But as this shutdown has been planned well in advance, it is unlikely have a major impact on the spot diesel market, a Singapore-based trader said.

It has a majority stake in the 60,000 bpd Numaligarh refinery in northeast India and the 120,000 bpd Bina plant in the centre of the country.