BMC never sent any notice to me until yesterday: Kangana Ranaut terms document dated 2018 as 'fake'

BMC never sent any notice to me until yesterday: Kangana Ranaut terms document dated 2018 as 'fake'

New Delhi [India], September 9 (ANI): Terming a document stating that BMC had sent a notice regarding unauthorised construction in her Mumbai in 2018, as "fake," actor Kangana Ranaut on Wednesday said that BMC had never "sent any notice" to her until Tuesday.
The 'Queen' actor took to Twitter to share a copy of the said document and accused the Maharashtra government of "spreading fake" information.
"Paid sources of Maha government are spreading fake info, BMC never sent any notice to me until yesterday," she tweeted.
"In fact I got all the documents cleared myself from BMC for renovations. [?]@mybmc [?] at least have the courage to stand by your audacity. why lie now?," she added.
The document dated October 20, 2018, had been doing rounds on Twitter since Wednesday morning. 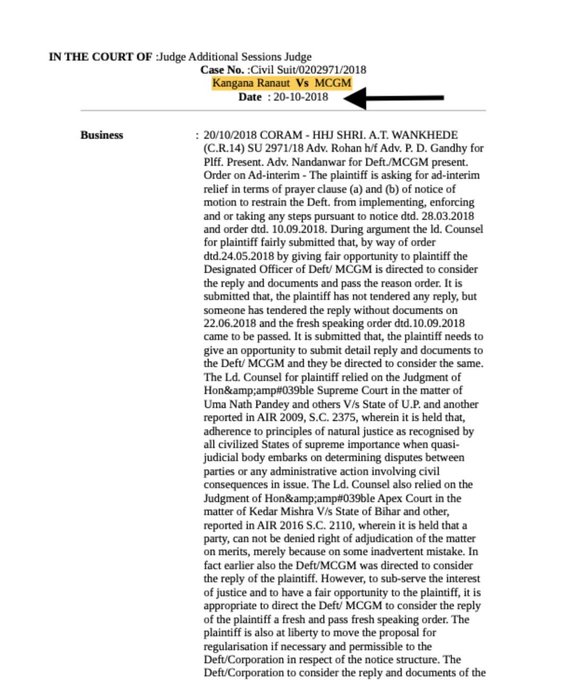 In a parallel development, the Bombay High Court had earlier in the day stayed the demolition drive being undertaken by the Brihanmumbai Municipal Corporation (BMC) at Kangana's property.
A bench of the High Court also asked the BMC to file a reply to her petition in the matter.
Ranaut, through her lawyer Rizwan Siddiqui, had moved the High Court against the demolition of what the BMC termed as "illegal alterations" at her office.
Earlier today, Ranaut took to Twitter to state "my Mumbai is POK now" and posted photographs of city municipal corporation officials demolishing parts of her property in the city. (ANI)