Ghaziabad (Uttar Pradesh) [India], January 27 (ANI): Bhartiya Kisan Union Rakesh spokesperson Rakesh Tikait on Wednesday distanced himself from the violence and Red Fort incident during farmers' tractor rally on the Republic Day, stating that those who created violence and unfurled flags at the fort will have to pay for their deeds.
Speaking to ANI, Tikait alleged that "uneducated people" were driving tractors who did not know the paths of Delhi.
"Uneducated people were driving tractors, they did not know the paths of Delhi. Administration told them the way towards Delhi. They went to Delhi and returned home. Some of them unknowingly deflected towards Red Fort. Police guided them to return and they returned," Tikait said.
"Those who created violence and unfurled flags at Red Fort will have to pay for their deeds. For the last two months, a conspiracy is going on against a particular community. This is not a movement of Sikhs, but farmers. Our issues remain the same and our protest will continue," he added.
On Tuesday, protesters agitating against the new farm laws entered the premises of Red Fort in the national capital and waved flags they were carrying from its ramparts.
Commenting on the allegations of farmer unions that Punjabi actor-singer-activist Deep Sidhu directed youth to move towards the Red Fort, he said, "Deep Sidhu is not a Sikh, he is a worker of the BJP. There is a picture of him with the Prime Minister. This is a movement of farmers and will remain so. Some people will have to leave this place immediately- those who broke barricading will never be a part of the movement."
On being asked about the viral video where Tikait was seen appealing to his supporters to be armed with lathis, the BKU spokesperson said, "We said bring your own sticks. Please show me a flag without a stick, I will accept my mistake."
An undated video of Tikait gone viral wherein he is seen asking and appealing to his supporters to be armed with lathis and be prepared to save their land.
A total of 22 FIRs have been registered in different police stations across the national capital in connection with the violence which broke out during yesterday's farmers' tractor rally. According to sources in the Delhi Police, the process of filing the FIRs started last night and "over 300 Delhi Police personnel were injured during the farmers' tractor violence at different locations in the national capital."
A day after the violence broke out during a tractor rally in various parts of the national capital, security has been heightened at the Singhu border (Delhi-Haryana border), and Tikri border, where farmers have been protesting against agricultural laws for over two months. A large number of security forces has been deployed at the protest site. 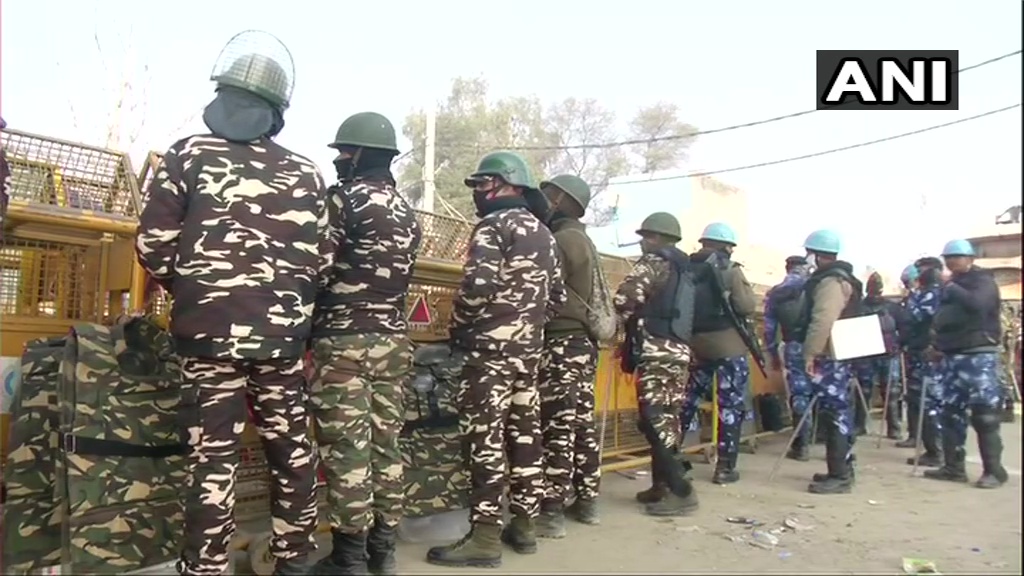 Farmers broke barricades to enter Delhi and indulged in vandalism across several parts of the national capital during their Kisan tractor rally organised to protest against the Centre's three new farm laws. Several public and private properties being damaged in acts of vandalism by the rioting mob.
Farmers have been protesting on the different borders of the national capital since November 26 against the three newly enacted farm laws - Farmers' Produce Trade and Commerce (Promotion and Facilitation) Act, 2020; the Farmers Empowerment and Protection) Agreement on Price Assurance and farm Services Act 2020 and the Essential Commodities (Amendment) Act, 2020. (ANI)