New Delhi [India], February 2 (ANI): Actor Ayushmann Khurrana on Tuesday unveiled the first look of his character, Joshua, from Anubhav Sinha's upcoming spy-thriller 'Anek'.
The 'Vicky Donor' actor, who had been shooting for the film with Anubhav in Assam, took to Instagram to reveal his first look from the forthcoming movie.
He shared two pictures on Instagram, one of which sees him holding the clapper board as he stands with the 'Thappad' filmmaker. Another picture sees the actor dressed in a deep olive green-coloured jacket, driving a jeep in the midst of a jungle.
The 36-year-old actor's new look from the film includes a side eyebrow slit, and a bearded look with slightly messy hair closely trimmed on the sides. It's safe to say that Ayushmann's rugged look as Joshua has certainly raised excitement among his fans since they haven't seen him in this avatar on screen before. 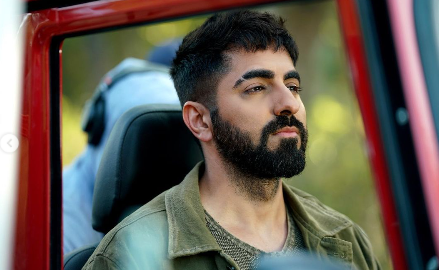 "Excited to be collaborating with Anubhav Sinha sir. Again. #ANEK. Here's presenting my look as Joshua produced by @anubhavsinhaa and #BhushanKumar," he wrote in the caption.
This marks Anubhav's second collaboration with Ayushmann after the critically-acclaimed 2019 film 'Article 15'. Helmed by the 'Mulk' filmmaker, 'Anek' is being bankrolled by Anubhav and Bhushan Kumar under Benaras Media Works and T-Series.
The film has gone on floors recently and the makers have planned an extensive shoot schedule in the North East region of the country. Sources suggest that 'Anek' is going to be Anubhav's most expensive and big-scale film to date. (ANI)