Ayushmann Khurrana's 'Bala' to be showcased at IndoGerman Filmweek today

Ayushmann Khurrana's 'Bala' to be showcased at IndoGerman Filmweek today

Mumbai (Maharashtra) [India], September 27 (ANI): Ayushmann Khurrana-starrer comedy-drama 'Bala' is all set to be screened at the prestigious Indo German Filmweek 2020 in Berlin today.
Film critic and trade analyst Taran Adarsh shared the update about the film on social media.
"UPDATE... #Bala to be showcased at IndoGerman Filmweek 2020 in #Berlin today... Stars #AyushmannKhurrana, #BhumiPednekar and #YamiGautam," he tweeted. 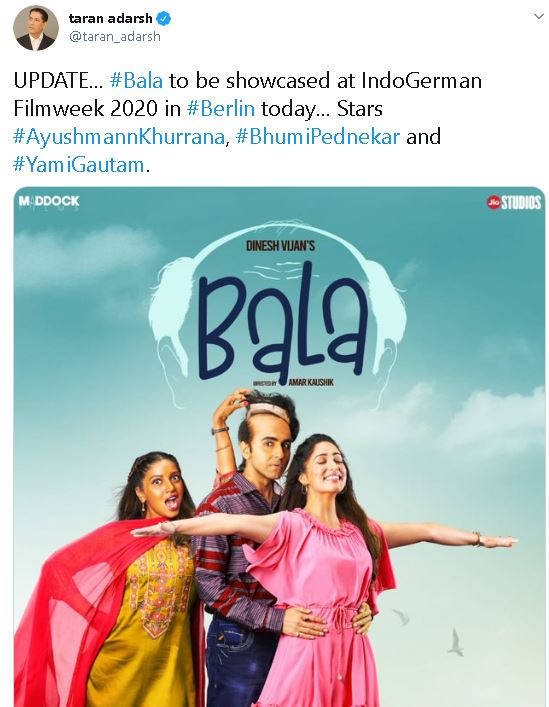 The film, which is also starring Bhumi Pednekar and Yami Gautam in the lead roles is based on premature balding. Ayushmann is seen playing the role of a guy who suffers from the condition and revolves around his love life struggles and how he gets demotivated because of his looks.
The film is helmed by 'Stree' director Amar Kaushik and produced by Dinesh Vijan. It also stars Javed Jaffery and Saurabh Shukla in supporting roles. (ANI)