New Delhi [India], February 21 (ANI): Marking the first anniversary of his acclaimed movie 'Shubh Mangal Zyada Saavdhan' which is based on same-sex love, Bollywood star Ayushmann Khurrana, on Sunday shared a powerful post on social media.
The 'Dream Girl' actor, who essayed the role of a homosexual man madly in love with his partner in the film, shared a still from the film where he could be seen speaking about homophobia with a loudspeaker in his hand wearing a rainbow cape.
Alongside the picture, he penned a powerful note in the caption that reads, "Taboo topics need to be constantly addressed through our cinema because it can really help alter the mindset of people."
In the context of the movie that raises a strong question for the society on why do people look for the treatment of homosexuality rather than not for homophobia instead, he wrote, "It takes a lot of time and effort to normalise taboo subjects and bring about constructive changes in society. I'm glad that we tried to contribute towards making the conversation about same-sex relationships in India mainstream through Shubh Mangal Zyada Saavdhan". 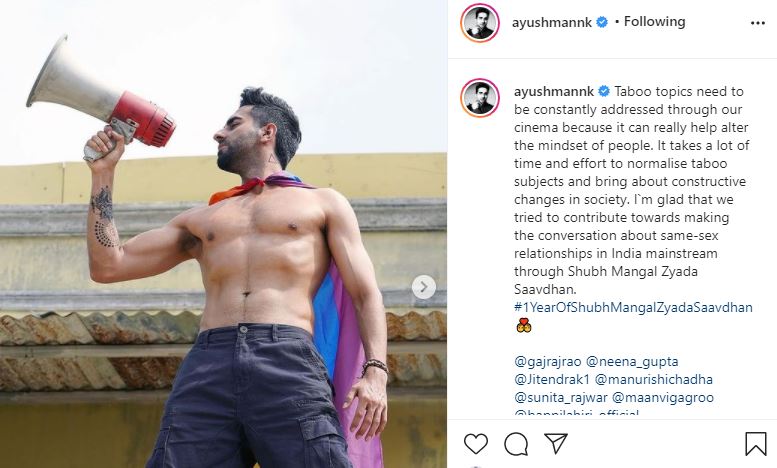 The film, which is a light-hearted comedy, can be seen as a progressive attempt towards the acceptance of same-sex couples, an issue that continues to remain taboo in India even after a year of its decriminalisation by the Supreme Court.
Helmed by Hitesh Kewalya and produced by Bhushan Kumar, the romantic comedy flick is the second installment of the much-acclaimed 2017 film 'Shubh Mangal Saavdhan' which dealt with a subject like erectile dysfunction. (ANI)