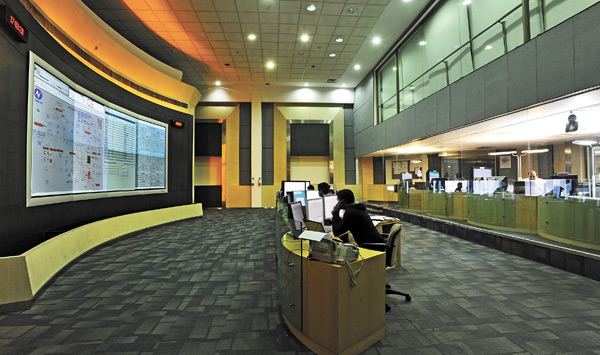 08 November, 2014
Print this article Font size -16+
The viewing gallery is like the balcony of a movie theatre. But the screen is not showing the latest Bollywood blockbuster. On the contrary, it shows a maze of tables and charts. Nine engineers are glued to their seats, eyes peeled on the screen. The setting is Tata Power Delhi Distribution’s (TPDDL) SCADA (supervisory control and data acquisition) room. The onscreen maze is a real-time layout of the distribution network, tracking parameters such as flow of power, faulty transformers, etc.

In another room is a group of engineers, glued to three screens each. These screens are part of the outage management system (OMS). The monitors show a labyrinth of lines marked with dots. The dots, says Parveen Kumar Verma, head, OMS technology and systems, are electric poles supplying power to 12-13 lakh consumers covered by TPDDL’s network. The OMS keeps track of each consumer and the status of his power supply. If there is anyone without power, the system has the details of who and why.

Both SCADA and OMS are part of the distribution utility’s smart grid system. Faults are located instantly and affected areas are isolated promptly so that surrounding areas do not suffer power outage as well. The reaction time for restoring faults is two hours — the Delhi Electricity Regulatory Commission (DERC) allows 3-4 hours. Customers are informed through an SMS about planned shutdowns 72 hours in advance. Intimating them about breakdowns is the next step. Before privatisation, Delhi’s distribution network was bleeding with aggregate technical and commercial (AT&C) losses to the extent of 53 per cent. This has come down to 11 per cent with the automation measures adopted by distribution companies such as TPDDL. Part of this includes introducing HVDCs (high-velocity distribution centres) to prevent people from hooking on lines and stealing power. Billing systems have also undergone a change. There are 3,000 bill payment points as opposed to 19 earlier.

Smart grid systems have become the latest buzzword in the global power industry. India formally joined this movement in May 2010 when then power minister Sushil Kumar Shinde launched the Indian Smart Grid Forum as well as the India Smart Grid Task Force. The forum is a non-profit voluntary consortium of public and private stakeholders. The task force is an inter-ministerial group that monitors and coordinates R&D activities as well as
smart grid projects. It has 10 working groups looking at new technologies, loss reduction, gathering data, providing reliable power to urban and rural areas, distribution, generation and renewable integration, among others.

Companies including HCL, TCS, Wipro, IBM, GE and ABB have joined hands with bodies such as the Power Grid Corporation of India (PGCIL) to look at software development, equipment, etc. There are as many as 14 pilot projects planned across the country in the distribution sector to test competence in areas such as AT&C losses, reduction in peak power purchase costs, reduction in outages and transformer failures. Smart grids are essential to prevent AT&C losses. Right now, they average 25-30 per cent. Says R. Dhamodaran, director of Smarter Planet Solutions, IBM: “The ‘smart grid’ is no longer just a concept, it’s a necessity... Governments, regulators and utility companies in India need to ensure that cities will survive under the crush of demand for access to the power grid.”

However, progress in smart grid adoption has been slow; none of the 14 pilot projects has begun yet. Some say, they are stuck for want of funds, though Rs 500 crore has been earmarked under the National Smart Grid Mission for the projects.
Most of the problems occur in distribution, says Prakash Nayak, chairman of the Institution of Engineering and Technology’s (IET) power panel, a platform of stakeholders in the power industry. “More than anything, we need participation from utilities,” he says, adding, “Many private utilities have gone in for this and are seeing benefits.” But public utilities lag behind. For them, the success of the 14 pilot projects will determine adoption of smart technologies. Experts say the cost-benefit advantage is immediate. Benefits from reducing losses due to theft and technical issues, and better revenue collection outweigh a seemingly large capital investment.
break-page-break
When it comes to India’s smart grid prowess, there seems to be a general consensus that the transmission network is way ahead of distribution. “The high voltage transmission network is pretty robust,” says Banmali Agrawala, President and CEO of GE Energy, India. The gaps, he feels, are in connecting the southern grid with the national and regional grids. Low voltage distribution, he feels, leaves a lot to be desired. He is echoed by Rathin Basu, managing director, at Alstom T&D India: “Since 2002, India’s transmission grid is ‘smart’. It has all the technologies required to make the grid reliable, to manage power flow and to even shed power.” Alstom won the contracts for three regional despatch centres as well as the National Despatch Centre, which was commissioned in 2007. “States are not at the same technology level as the PGCIL,” he says. He attributes this to SEBs’ lack of fiscal power while PGCIL has always been profit-making. Basu also believes that PGCIL’s tendering of contracts for technologies has been focused and segregated. In contrast, at the distribution level,  civil contractors are included in the tendering package that calls for advanced software expertise. “Consequently, the qualified people are not the guys implementing it,” he says.

Agrawala, however, says the problem lies with the structure. “The bulk of transmission is handled by a central, nodal agency. That brings in a certain amount of discipline.” Distribution, however, is a state subject and requires a political process. Consequently, “there is a lack of action on the distribution side. The pace of reforms is slow.” Load-shedding is another aspect.  “We cannot have a regime of load-shedding with smart grids. The benefits would be minimal in this case,” Agrawala adds.

There is a third aspect. Says IET’s Nayak: “What is missing is integrating consumers.” This is where smart meters come in to create that two-way communication between suppliers and users. Combined with preferential or time-of-day (TOD) power tariffs, a supplier can map usage patterns; consumers, on the other hand, are now incentivised to actually switch loads from peak hours to off-peak hours with TOD tariffs. TOD has already been introduced in some states for industrial consumers.

Take, for instance, the partnership between TDDPL and the Delhi Jal Board (DJB). “They (DJB) don’t need to pump water during peak hours and have already shifted their load,” says TDDPL CEO Praveer Sinha. The distribution company is working with industrial consumers on automated meter readings (AMR). Says Sinha, “We needed to reach out to consumers. We needed to ensure power supply to them and needed to know their power consumption.” TDDPL has some 40,000 AMRs which provide consumer data every 15 minutes. At Rs 4,000 apiece, AMRs are more expensive than normal meters but they have been quite fruitful. The consumers, says Sinha, are more than happy since they are getting cost-effective power. The next step is moving to smart meters. But “for smart meters to work, there must be connectivity (about 40 per cent are still to be connected to the grid) as well as reliable 24x7 power supply,” he says.

The Challenges
But putting a smart grid system in place poses many challenges. It is costly. A smart meter costs around Rs 10,000. Engineers have to be trained for using IT-embedded electrical systems. Then, there are questions over the security of the system and the information generated. “Anyone with mala fide intentions can introduce a virus. So, we have to design a system that can isolate the affected areas,” says a Central Electricity Authority (CEA) official.

Smart grids have many applications. As the CEA official put it, “The smartness of the concept is only limited by imagination.” For instance, consumers can actually ask for the type of power they want — coal, gas, wind, etc. We can connect captive generation points to the grid. Most importantly, a smart system has the potential to reduce India’s growing power deficit (at present, it stands at 10 per cent) by addressing transmission and distribution efficiency, mapping consumer behaviour and through better peak load management.

For now, projects are still stuck at the pilot stage and so are policies and investments that can give them a push. “At this stage, the regulator’s role is limited since it is in the pilot stage,” says  Pramod Deo, chairman of Central Electricity Regulatory Commission (CERC). He brings in an additional aspect: separate supply lines for agriculture. This, he says, will show the actual loss from technical and commercial reasons, which is otherwise passed off as agriculture supply. Gujarat went in for this in 2006. Called the Jyoti Gram project, it provides a separate lines for domestic use and agricultural supply. Now, domestic consumers no longer have to go without power when supply to agriculture is stopped.

“The thing to remember is that the electrical system has remained unchanged in structure since the late 19th century,” says Bazmi Husain, MD of ABB India. For India, he says, the biggest advantage and opportunity is the absence of adequate infrastructure for providing electricity. As it takes more time and costs more to overhaul an existing system than to build a new one, India’s poor power network is ripe for the taking.