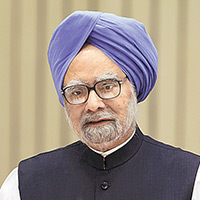 08 November, 2014
Print this article Font size -16+
India's average economic growth rose to 7.7 per cent in the 10-year regime of the UPA government as compared to 6.2 per cent recorded in the previous decade.

A report card titled '10 Years of Progress and Growth' highlighting achievements of the government led by Prime Minister Manmohan Singh today said "average GDP growth rate during the period of UPA government (2004-05 to 2013-14) has been 7.7 per cent despite two global slowdown in this period".

Agriculture growth rate, it said, has been rising consistently and the sector expanded by 2.5 per cent and 3.7 per cent during the 10th and 11th Five Year Plans, respectively, and expected to touch 4 per cent in the ongoing 12th Plan period.

It further said the country's GDP at the current price has increased almost three times to Rs 100.28 lakh crore during the last nine years from Rs 32.42 lakh crore in 2004-05.

"Per capita income has increased at an annual average of nearly 20 per cent during the last nine years, well above the consumer price index during the same period," it said.

On rural wages, the document said it has tripled in the last year and thus improving the purchasing power of majority of people in villages.

Referring to large projects, it said the UPA government has expedited and cleared as many 293 projects involving investment of Rs 5.7 lakh crore in 2013.

To fast track stalled projects, the government has set up Cabinet Committee on Investment (CCI) and Project Monitoring Group (PMG).

The document further informed that credit flow to Micro, Small and Medium Enterprises (MSME) has grown nearly seven times in the last seven years. The outstanding loan to the MSME sector was at Rs 5.27 lakh crore in 2012 as against Rs 83,498 crore in 2005.

It said that in the last two years, 80,000 micro enterprises have been supported by Prime Minister's Employment Generation Programme, creating job opportunities for 9.23 lakh people.

Towards financial inclusion, the document said more people are now using bank facilities. The number of bank accounts have increased from 43.97 crore in 2004 to 77.32 crore as of last year.