Auditor Rotation: It's A Split Verdict 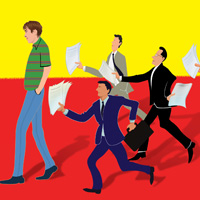 08 November, 2014
Print this article Font size -16+
The noise over mandatory rotation of auditors just rose another notch this week, with the US Senate banning the idea floated by the US Public Company Accounting Oversight Board. PCAOB, an independent accounting regulator for US-listed companies, had argued that forcing companies to routinely change their auditors would break up the cosy relationships between the auditors and the companies they audited.

This assumes significance in India in the light of the Companies Bill, which is expected to be discussed in the Monsoon Session by the Rajya Sabha (Lok Sabha had passed the Bill in December), mandating that auditors of Indian companies should have a maximum tenure of ten years, with  the partner signing the report being changed every five years. The Ministry of Corporate Affairs has refused to budge from it's position in spite of several representations from the Institute of Chartered Accountants of India. Meanwhile in Europe, both the European Union as well as UK Competition Commission are expected to make auditor rotation mandatory soon, with lobby groups working hard to dilute the proposal.

“There has to be rotation”, says corporate governance watchdog Amit Tandon, whose proxy advisory firm IiAS studied trends among Indian companies with respect to audits last year. It found that some of the largest Indian companies have had the same auditors for over 15 years. Hindalco has had the same auditor —  Kolkata-based Singhi & Co — for over 50 years; RIL has had Chaturvedi & Shah as its auditor for over 35 (jointly auditing with Deloitte since 2005); and Larsen & Tourbo is a client of Sharp & Tannan for over 30 years. “It is good to have somebody looking at the accounts with a fresh pair of eyes”, he says.

The US Senate’s move comes after heavy criticism and lobbying by the biggest accounting firms, comprising mainly of the Big 4 — Deloitte, PwC, EY & KPMG. In Europe, several industry bodies are said to have rejected the idea of rotation, saying it will only increase costs, and impact the quality of audits. In India, ironically, the accounting regulator ICAI has criticised the move saying that rotation will lead to more concentration of audits among the Big 4, rather than the other way round. The IiAS survey found that 55 per cent of the audit market was held by the Big 4.

“The question should be about independence of the auditor”, says Nikhil Singhi, partner at Singhi & Co, which is a member firm of Baker Tilly International, the eighth largest network in the world. “Longstanding relationships could lead to the auditors being too comfortable with the management, but a mandatory rotation of the signing partner should take care of that issue”, he argues.

Whereas Motilal Oswal, Chairman of Motilal Oswal Securities says that rotation gives a healthy choice to the shareholder. His argument is that quite often, the shareholders don’t have a say in the re-appointment of the auditor, hence requiring the law to mandate rotation. In fact, he says, even the Audit Committee (part of the company's Board), which proposes the name as well as interacts with the auditor, should also be mandatorily changed so as to ensure maximum transparency for the shareholder.