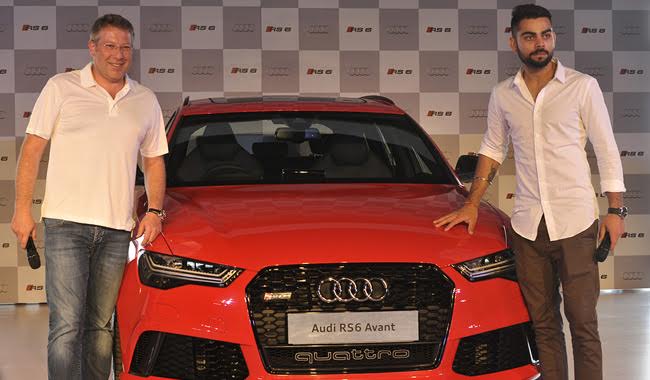 08 June, 2015
Print this article Font size -16+
German luxury car manufacturer  Audi on Thursday (04 June) launched its super sports car RS 6 Avant priced at Rs 1.35 crore (ex-showroom Delhi and Mumbai) as it looks to consolidate leadership position in performance segment.
The RS6 Avant is a high-performance version of the company’s A6 Avant estate and is stated to challenge the likes of Mercedes E63 AMG Sedan.
"We believe it's about time to introduce the Avant to luxury connoisseurs in the country...we are confident that the elegant dynamics of the car will appeal to auto enthusiasts seeking style, speed and luxury," Audi India head Joe King said.

"The Audi RS 6 Avant will not only help us consolidate our leadership position in the performance car segment, but will also inspire us to continue with our commitment to bring in the right product offering at the right time for our Indian customers," he added.
King further said that the comapny has a long-term plan for India. The Audi RS 6 Avant is the fourth sports car to be launched in India by the company this year after the Audi R8 LMX, the new Audi TT Coupe and the new Audi RS 7 Sportback.

The Audi RS 6 Avant boasts a fiery 4.0-litre twin-turbo V8 engine which produces 560PS of power and 700Nm of torque.  The company said its latest super sports car can accelerate from 0 to 100 km in just 3.9 seconds with a top speed of 305 km/hr. India Test captain Virat Kohli launched the Audi RS6 Avant at an event in the Capital.
Audi plans to launch a total of 10 products in India this year as it looks to fend off stiff competition from rival Mercedes-Benz.
The company, which sells various popular brands including A3 sedan and Q5 sports utility vehicle, was overtaken by Mercedes-Benz in the January-March period this year.
Audi posted a record sales in 2014-15 by selling 11,292 units, up 11.51 per cent from 10,126 units sold in 2013-14 and retained its top position in the Indian luxury car market ahead of rival Mercedes-Benz, which also clocked record sales in FY15 at 11,213 units, up 17.5 per cent from 9,548 units sold in the previous year.
Tags assigned to this article:
auto more 4 suv audi bmw mercedes virat kohli rs6 avant