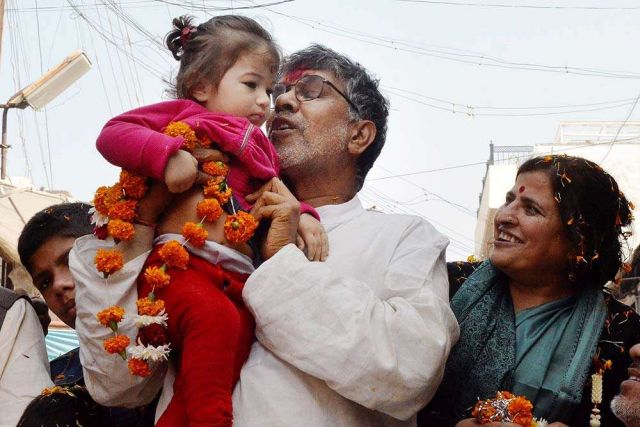 Kailash Satyarthi Children's Foundation (KSCF) thanks the Assam Government under the leadership of Chief Minister Tarun Gogoi for taking prompt action on the suggestions of our Founder in tackling various forms of child abuse in the state. KSCF will be working closely with the office of Chief Minister on the initiatives announced.

Nobel Peace Laureate Kailash Satyarthi had met Shri Tarun Gogoi in July this year and had requested his urgent support in curbing the high incidence of child trafficking and abuse in Assam.

"I commend Assam Government and Shri Tarun Gogoi for the active support against child trafficking and child abuse. The menace of unregulated placement agencies leading to child trafficking needed urgent attention and through this announcement Assam government has set an example for other states combating violence against children. KSCF will ensure complete support to government in this endeavour," said Nobel Peace laureate and KSCF founder  Kailash Satyarthi.

In a meeting on 17th August 2015 in Dispur, Assam, Shri Gogoi directed concerned departments to formulate strict deterrents to stop child and women trafficking, unlawful employment of children through placement agencies, stopping child marriages and other crimes related to women and children.

The State Government also decided to conduct a survey in consultation with KSCF and UNICEF and partner with the Foundation for rehabilitation and welfare of trafficked children.

Gogoi has also directed the state government to put in place strict rules and regulations for strict vigilance over placement agencies and their activities. He also directed formulation of strategy to prevent exploitation of children by parents.