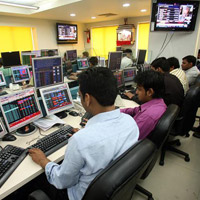 08 November, 2014
Print this article Font size -16+
Asian share markets rose on 19 December after the Federal Reserve drew the sting from tapering its stimulus by recommitting to low interest rates, leaving Wall Street at record heights and the dollar galloping above 104.00 yen for the first time since 2008.

The slide in the yen was viewed as positive for Japanese exports and profits, and thus for the Nikkei which climbed 1.6 per cent to threaten its peak for this year.

After months of agonising, investors took the Fed's decision to trim its bond buying by $10 billion to $75 billion a month as a modest step and one the US economy could well withstand.

Crucially, the Fed softened the blow by making its forward guidance even more dovish.

"It likely will be appropriate to maintain the current target range for the federal funds rate well past the time that the unemployment rate declines below 6-1/2 per cent, especially if projected inflation continues to run below the committee's 2 per cent longer-run goal," the Fed statement said.

Alan Ruskin, global head of G10 currency strategy at Deutsche Bank in New York, noted the Fed's forecasts for the funds rate had also been trimmed out to the end of 2016.

"This is a very dovish taper-lite where the Fed has done its utmost to provide an offset with forward guidance," said Ruskin.

"It tends to elevate the importance of the inflation rate in decision making should it be meaningfully undershooting target, which is very constructive for risky assets."

Stocks gained from Sydney to Seoul, while MSCI's broadest index of Asia-Pacific shares outside Japan edged up 0.1 per cent.

Shanghai broke ranks with a drop of 0.1 per cent after China's central bank declined to add liquidity to the banking system, pushing up money market rates.

Low For Longer
The Fed's message that tapering was not tightening looked to have resonated in debt markets as Fed fund futures held broadly steady out to the early 2016 contracts. A first hike in the funds rate is not fully priced in until November 2015.

Treasury yields were stable for three years ahead, while rising at the longer end as the yield curve steepened. Yields on 10-year notes increased 5 basis points to 2.89 per cent, but remain below their 2013 peak of 3 per cent.

Still, tapering could be a double-edged sword for some Asian countries since it could accelerate the "great rotation" of funds out of emerging markets and into developed world assets.

Indonesia, the Philippines, Thailand and Malaysia have all been hit to a varying extent in recent months.

The Indonesian rupiah hit a fresh five-year low, though the Fed's move was welcomed by Deputy Governor of Bank Indonesia, Perry Warjiyo.

"That would be positive for financial market stability, including rupiah stability, going forward. A more visible US economic recovery would also help Indonesian exports."

Others are also better prepared for the change. Notably the mood around India has improved enough that the country's central bank could hold off on hiking interest rates on Wednesday, surprising many.

The fallout in commodity markets was generally muted. Gold was the main casualty slipping to $1,220 an ounce and uncomfortably close to the year low at $1,211.80. Copper fell the most in nearly three weeks to be down 0.5 per cent.

Oil prices took only a small hit, with investors perhaps encouraged by signs of a pick up in global growth.