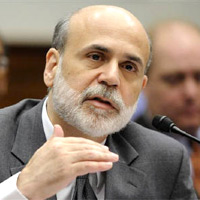 08 November, 2014
Print this article Font size -16+
Asian shares hit a near four-week high on Thursday (11 July) and the dollar extended losses on comments by Federal Reserve Chairman Ben Bernanke that monetary stimulus would still be needed for the foreseeable future.

The BSE Sensex rallied to nearly 1-month highs after US Federal Reserve Chairman Ben Bernanke said on Wednesday a highly accommodative monetary policy would be needed for the foreseeable future, raising hopes any tapering of the asset purchase programme may not be necessarily close. The Sensex was up more than 2 per cent after hitting its highest mark since 7 June. The Nifty was up 2.12 per cent, after marking its highest intraday level since 10 June. The gains are being fed by hopes that foreign investors may taper off their recent selling, which has reached a net Rs 11,080 crore since the start of June.

European shares were expected to shoot higher, with London's FTSE 100 seen opening up as much as 1.6 per cent and Germany's DAX up as much as 1.3 per cent. The S&P 500 index futures rose 1.1 per cent. Financial markets have recently sold off on concerns that the Fed may begin to scale back its $85 billion a month bond-buying programme as soon as September.

But Bernanke's remarks, which played down the strength of last week's June payrolls report, prompted investors to reassess the risk of an early end to the Fed's programme. They cut long dollar positions and sent US Treasuries higher.

The dollar index dipped 0.2 per cent, extending Wednesday's 1.8 per cent fall - a magnitude not seen since 2008-2009 at the height of the global financial crisis.

"I was pretty shocked with this selloff this morning. Obviously, Bernanke kicked it all off, but it was a bit of a delayed reaction," said Bart Wakabayashi, head of forex at State Street Global Markets in Tokyo. "I'm hearing there were some margin calls, stop losses triggered there, and it moved down, so it seems like it's pretty thin and maybe some Asian players were trying to unwind their dollar longs. But it does seem like a bit of an overreaction. Having said that, it's a bit surprising, all of a sudden, the change in the tone of Bernanke, so it's a whole new world all of a sudden."

The euro surged 1.8 per cent after earlier hitting a three-week high of $1.32085. Against the yen, the dollar eased 1 per cent after falling to a two-week low of 98.20 yen. Citi said the dollar selloff offered an opportunity to buy on dip given the strength in the US economy in the near term.

Commodity currencies also jumped against their US peer with the Australian dollar climbing as high as $0.9306, putting further distance from a 34-month trough of $0.9036 plumbed just last week.

The Australian dollar was also aided by a surprise increase in Australian employment in June, a result that may lessen the chance of the central bank lowering interest rates further in the short-term.

Relief Rally
"Those who had expected that the Fed's tapering could start as early as September were relieved that it would come later than that," said Kyoya Okazawa, head of global equities at BNP Paribas in Tokyo.

MSCI Asia-Pacific ex-Japan index jumped 3 per cent, hitting a near four-week high and on track for its biggest one-day rise in 10 months, while Seoul and Thai stocks rose 2.9 and 3.2 per cent, respectively. China's CSI300 index surged 4.6 per cent, buoyed by a report in official media that financing rules may be partially relaxed for real estate firms. But as the yen strengthened, Tokyo's Nikkei share average underperformed other Asian markets, up 0.4 per cent.

The Bank of Japan kept its monetary policy steady but said an economic recovery was underway, its most optimistic view in 2-1/2 years reflecting the positive impact of a weakening yen and its massive stimulus.

Underscoring the improving sentiment, Japan's core machinery orders rose 10.5 per cent in May from the previous month.

The Bank of Korea also on Thursday raised economic growth forecast this and next year as it held the benchmark interest rates steady.

Commodities Higher
Copper prices gained 3.2 per cent to exceed $7,000 a tonne, hitting a three-week high and extending the previous session's 1.4 per cent rise as the dollar softened.

Gold climbed 2.4 per cent to a three-week high and was on track for a fourth straight day of gain.

US crude oil prices added 0.7 per cent to their highest level since March 2012 and after Wednesday's 2.9 per cent jump, their biggest one-day rise in more than two months as US data showed the biggest two-week decline on record in oil stockpiles.

Yields on benchmark 10-year US Treasuries eased 11 basis points to 2.5606 per cent in Asian trade, sharply off a 23-month peak of 2.755 per cent touched on Monday after Friday's stronger-than-expected payrolls data.