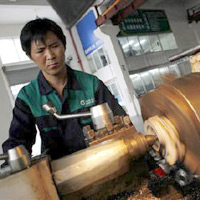 08 November, 2014
Print this article Font size -16+
Asia's manufacturing sector ended 2013 on a strong note, with expansion hitting multi-year highs in export-driven Japan and Taiwan, but signs of moderation in China raises concerns about the outlook for the new year.

Both official and private measures of manufacturing activity in China fell in December, reinforcing views the world's second-largest economy lost some steam in the final quarter of 2013.

The HSBC/Markit Purchasing Managers' Index (PMI) for China slipped to a three-month low of 50.5 in December, consistent with a dip in the government's PMI to a four-month low of 51.0. Still, both held above the 50 point level that separates expansion from contraction.

"The economy is still growing, no doubt, but the growth momentum has weakened," said Yao Wei, economist at Societe Generale in Hong Kong.

That could temper some of the optimism about export-dependent countries such as Japan, where the last week the Markit/JMMA Manufacturing PMI rose to a 7-1/2 year high in December.

The manufacturing data weighed on Asian shares on 2 January, with the MSCI's broadest index of Asia-Pacific shares outside Japan down 0.6 per cent.

The PMI report from the euro zone is due at 0858 GMT, while the report for the United States is due at 1358 GMT.

Export Uncertainty
Many Asian economies are expecting a pick-up in exports given signs that the US economy, a major market for the region, is on the mend. However, there were mixed signals in the HSBC/Markit PMIs.

Taiwanese manufacturers last month posted the sharpest expansion of output since April 2011, and new export orders rose. But in South Korea, new export orders dipped even as overall activity picked up to a seven-month high.

In China, both the official and private PMIs showed export orders contracted in December.

Data on Wednesday showed South Korea's exports to China, its biggest market, grew 8.4 per cent from a year earlier compared with 13.2 percent for exports to the United States.

"The stronger increase in manufacturing output suggests that growth will be sustained over the final quarter of the year, keeping the economy on track for a gradual recovery," HSBC economist Ronald Man said about South Korea.

"But given demand from China has still not shown signs of picking up meaningfully, we believe the overall upswing in economic activity will be limited."

Other PMI surveys showed the more consumer-driven economies of India and Indonesia continued to struggle after a difficult 2013, although there were some glimmers of hope.

As a result, the HSBC Manufacturing PMI fell to 50.7 in December from 51.3 in the previous month.

In Indonesia, manufacturing activity in December improved to 50.9 from 50.3, underpinned by expansion in output and new orders.