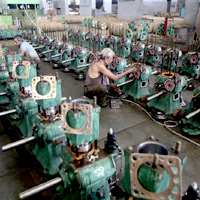 08 November, 2014
Print this article Font size -16+
Asia's factory sectors grew at their fastest pace in months in October led by China, providing some signs of a pick up in global demand as export orders expand.

The major Asian economies of China, Japan, South Korea and India reported new export orders expanding simultaneously for the first time since May, which economists attributed partly to brighter prospects in Europe.

"Overall, the data is positive for global demand," said Radhika Rao, an economist with DBS in Singapore. "There are reasons to be optimistic, but cautiously optimistic," she said.

The surveys provide a more upbeat view of world demand following a month in which a political standoff in Washington over the U.S. debt ceiling and the sixth straight cut in IMF global economic forecasts had raised fresh concerns about the health of the global economy.

India was the exception among a group of generally upbeat PMI reports in Asia. Although new exports orders picked up sharply, the HSBC PMI for India showed manufacturing activity shrank for a third straight month, a further sign of a slowdown in Asia's third-biggest economy.

HSBC's chief economist for India, Leif Eskesen, said inflation suggested the central bank, the Reserve Bank of India (RBI), would not have room to provide any support for growth.

"Input price inflation accelerated further despite the weak growth backdrop, as the effects of the depreciated exchange rate continue to pass through. This suggests that the RBI has to continue its staring contest with inflation," Eskesen said.

China's official PMI rose to 51.4 in October from 51.1 in September, topping expectations for a reading of 51.2.

A similar report from HSBC/Markit increased to 50.9, a seven-month high. It showed a tick up in the pace of new domestic and export orders, as well as the first increase in employment in seven months.

China's reassuring PMI reading limited losses in Asian stocks, which were under pressure after strong U.S. data added to uncertainty over when the U.S. Federal Reserve might begin to ease back on its stimulus.

The HSBC/Markit PMI for South Korea showed factory activity expanded for the first time in five months in October and a separate report said the value of exports in the month handily beat expectations to hit a record high of $50.5 billion.

Factory activity in major exporter Taiwan, key to many global tech supply chains, was running at its fastest pace since March 2012.

Japan reported on Thursday that its factory activity grew at the fastest pace in more than three years as the Markit/JMMA PMI rose to a seasonally adjusted 54.2, adding to hopes that the world's third-largest economy and home to big brand names like Sony and Toyota is pulling out of two decades of stagnation.

India's HSBC PMI compiled by Markit was unchanged at 49.6 in October, indicating the sector was contracting.

The downbeat data did little to shake stock market sentiment though. The main share index hit a record high fuelled by foreign money flowing into the country.