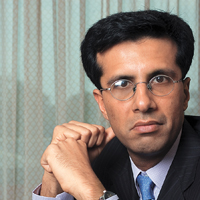 Dhawan, who founded ChrysCapital in 1998 with Harvard Business School classmate Raj Kondur, will formally step down next July. Until then he will handhold the firm through the process of raising its sixth fund, the corpus for which has not been announced yet. He will also lead investments up to that time. Thereafter, he will retire completely from the PE business to focus on social initiatives, notably education.
Not surprisingly, Dhawan's last move is a well-meditated one. "This was on the cards for a long time and I informed my colleagues at an internal meeting last August," he told BW. Dhawan's departure is one of a recent series of high-profile exits by PE honchos. Just weeks ago, Sequoia Capital India's four founding partners quit to start a public equities-focused PE firm dubbed WestBridge Capital Partners. In the past, Citigroup's Ajay Relan and ICICI Venture's Renuka Ramnath moved on to set up independent outfits. True to form, Dhawan is the exception to the rule in that he is the only one to entirely exit the business.

It is an unusual move since it comes at a time when ChrysCapital is at the top of its game. Since 1998, the firm has raised over $2 billion from foreign investors. It set a record in 2007 when it raised a $1.25-billion fund, its fifth, making it the first homegrown PE investor to breach the $1-billion mark. As on October 2010, it had shored up 32 exits worth $1.1 billion out of a portfolio of 60 companies, ranking it third after Warburg Pincus and Citi Venture Capital International, according to Delhi-based investment database VCCEdge.

However, since 2008, the firm has also been more cautious in putting fresh money to work. One of the chief reasons has been the high valuation of private firms. This has been encouraged largely by the almost unbridled influx of PE money into the Indian market. In 2010, total investments were at $6.3 billion, according to investment advisory firm Grant Thornton. The same year, in an unprecedented move for the Indian PE market, ChrysCapital reportedly returned about $300 million of its $1.25-billion fifth fund to its investors. At the time nearly 50 per cent of the fund remained uninvested.

Dhawan quits the PE business at a time when it is at an inflection point. He has played a critical role in scripting its journey to this point. In 2001, he set the agenda for PE investing in India when he decided to mix things up and become one of the trade's most aggressive investors in listed companies. The strategy paid off for ChrysCapital as it did for several others who mirrored its moves. However, it has also taken PE away from its traditional purpose — invest in unlisted companies and build value to deliver supernormal returns. Investments in listed companies, also known as PIPEs (private investment in public equities), yield returns faster but are smaller. This has not gone down well with limited partners (institutions that invest in PE funds) who expect an average IRR (internal rate of return) of 30 per cent.

PE firms are now under pressure to strike a balance. They have to craft new investment themes and find new high-barrier sectors. Dhawan has placed his bets, albeit on a non-profit basis, on India's emerging social sector. It could be a good place to begin.