As Drought Looms In India, Fear For Its Cattle 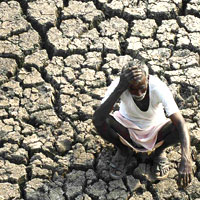 Armed with the latest monsoon rainfall data, weather experts finally conceded this month that India is facing a drought, confirming what millions of livestock farmers around the country had known for weeks.

For over three months, even state agencies have been providing free fodder to those most vulnerable to a shortfall in India's annual monsoon -- farmers who eke a living out of small landholdings and the milk provided by cattle.

At the end of April, Bhimrao Chavan and his wife abandoned their land in western India and headed for a camp that doubles as a centre for the provision of free fodder. Their scrawny cattle and a couple of goats amble around a hut made of straw, leaves and plastic sheeting that Chavan and his family share.

At first, there was just a handful of families at the makeshift settlement on the outskirts of a small town some 320 km (200 miles) southeast of Mumbai in Maharashtra. But as the monsoon rains failed to show week after week through June and July, turning fields across the region from luscious green to parched white, the numbers there swelled.

Today, the Mhaswad settlement has the air of a refugee camp, teeming with some 6,500 people and nearly twice as many animals: cows, bullocks and goats that would have gone for slaughter or faced starvation had they not made the journey.

"The most important thing for me is keeping my cattle alive as that is my only source of income. Without them we can't survive," said 40-year-old Chavan as he cut sugarcane into small pieces for his cattle in the early morning sunlight.

India is heavily dependent on the capricious annual monsoon, which brings about 75 per cent of the rainfall that the country receives, to irrigate crops and fill its reservoirs.

Although agriculture accounts for just 14 per cent of the economy's output, a successful monsoon can be life-changing for some 600 million people - half of the population - who depend on farming for a livelihood. Monsoon failures have led to millions of deaths over the past century and buffeted the economy.

Devastating Blow
Just over halfway through this season, the rains are 17 per cent below normal, and the weather office has forecast that the El Nino weather pattern will bring more disappointment in the few weeks that remain.

The drought, India's first since 2009, will not bring a shortage of staples as the nation's grain stores are overflowing with rice and wheat, and sugar output is set to exceed demand for a third straight year.

But it will deal a devastating blow to grain crops used for animal feed. That would badly hit the vast majority of the country's farmers who - with cattle and small landholdings their only assets - struggle to survive at the best of times.

Monsoon failures are so threatening that the government keeps a "Drought Manual". In this weighty document, "cattle wealth" is described as the mainstay of the rural economy, but it is precarious because when seriously depleted its recovery is very slow, with stocks growing at just 1-2 per cent a year.

Chavan's family of 12 is typical: their annual income is usually around 90,000 rupees, a tiny enough sum, but this year it will be even lower because there has not been enough rain to plant crops on their 3 acres (1.2 hectares) of land at the village of Pulkoti not far from the fodder camp. Neighbours who did sow have seen their crops wither and die.

"Until next year we will only get money by selling milk," said Chavan's wife, Lilabai, as she stood barefoot in the dusty camp as farmers around her milked their cows and collected dung for fuel and manure.

"We were thinking of selling our livestock because we didn't have money to buy fodder. Fortunately, the camp was started, otherwise by now our animals would have been slaughtered."

Ripple Effect Across Communities
The government has promised to provide all vulnerable farmers with animal feed. But Maharashtra is not the only state hit hard by the drought - the others are Punjab, Haryana and Rajasthan in the north, Gujarat in the west and Karnataka in the south - and, saddled with sharply slowing economic growth and a yawning fiscal gap, the government will be hard-pressed to deliver.

Indeed, there are very few camps like the one at Mhaswad in Maharashtra, and fodder prices have surged on short-supply.

Just 50 km (30 miles) away, for example, Rajesh Hanmantrao Deshmukh has taken a 60,000 rupee loan to buy fodder for his 10 buffaloes. In a good year he would expect to earn 100,000 rupees, but this year he expects to lose that much.

"Keeping buffaloes is now a loss-making business," Deshmukh said as he bought cane from a state-subsidised depot. "I used to get fodder from my farm but this year the farms are empty."

Others cannot get loans, which has led to distress selling of livestock for slaughter - and, with it, a drop in prices.

This year's disaster will have a ripple effect across rural communities of Maharashtra, forcing many to migrate from the hardscrabble hinterland to the financial capital, Mumbai.

"Nothing has changed in rural areas despite all the progress. When drought strikes, young people have to migrate," said Ashok Galande, a resident of Pulkoti village who sold his pair of bullocks during a drought in 1972 and moved to Mumbai.

"Drought cripples everything at the village. In big cities you can find work for a livelihood," said Galande, who has found life tough since returning to his rural roots last year.

To generate employment, the state government is trying to expand the scope of a national job guarantee scheme, but many local businesses that rely on farmers are suffering already.

"Sales are only five per cent of normal," grumbled seed and fertiliser seller Janardan Narle in Mhaswad. "Why would farmers buy seeds, fertilisers or pesticides when there is no rainfall?"

Cloth merchant Amar Rokade's takings have dropped by about 60 per cent this monsoon season and he has sacked two of his three workers, while motor-cycle dealer Sanjay Bhagwat says his sales have fallen by 50 per cent.

They are both worried that worse is to come in the months ahead when, normally, they would be enjoying brisk sales during the Hindu festivals of Dusshera and Diwali.

"If the rains fail in the next two months in our areas, then it will hammer our festival-season sales," said Bhagwat.